By Laura Tussupbekova in Nation on 13 March 2013

President Nazarbayev invited women of different professions to Akorda on the eve of the International Women’s Day to praise their achievements and role in development of the state.

Women representing different professions including military, business, medicine, teaching and art attended the meeting which took place on March 7. In his remarks, the President praised the women of the nation for their crucial role in securing its future and in bringing up the coming generations.

“The birth rate in any country is known to be the impetus of its development rate,” the President said. “Over the past five years, the national birth rate in Kazakhstan has risen by 11 percent and the natural population growth has amounted to 37 percent. In 2012, 379,000 children were born, an increase of 150 percent on 2004. And behind each new life stands the enormous role played by the mother with her patience, endurance, love and kindness. Children are born when the parents are confident in the future.”

“During the years of independence, six million children have been born in Kazakhstan,” Nazarbayev said. “The main thing is not only to raise them, but also to bring them up as responsible citizens. For we see that a lot of problems cannot be addressed by the laws and the economy of the nation, but by human qualities. We need thinkers, responsible citizens, patriots in our country. All these qualities are instilled in the family and through education.”

“Motherhood is hard work, although for some reason this art is not taught. However, motherhood, family life and the upbringing of children must also be taught,” he added.

“Knowledge should be instilled from childhood,” the President said. “At times the schools shift the responsibility for this process on to parents, and parents put it back on to the schools, whereas they ought to share it.”

“The teacher’s role cannot be reduced to just being a transmitter of knowledge. We need a different system of education,” the President said.

Nazarbayev said the recently adopted education savings system will help to develop and improve national education standards. The system has been successfully applied in developed countries. When a family saves money for its children’s education, it collects interest from the bank, and the state pays the extra premium. Account holders can also take out educational loans on favourable terms.

“The earlier a family starts saving even a small amount, the more opportunities there will be for its children to receive a good education,” the President said. “We have adopted this programme in our national development strategy to 2050. Why do we plan this? To see our children, the next generation, enjoy the fruits of all this work. Every family does everything it can for its children. So Kazakhstan, as a large multi-ethnic family, is working for its future generations,” he said.

The President noted that life expectancy has increased in Kazakhstan. He said the Salamatty Kazakhstan state healthcare programme has allocated 360 billion tenge ($23.88 billion) through 2015 to improve the national health standards.

The people of Kazakhstan are guaranteed free medical care and 21 new perinatal centers with modern equipment have opened across the country, Nazarbayev added. Infant and maternal mortality has dropped dramatically. New preschools are being opened around the country under the Balapan state programme. By 2020, all pre-school age children will have places in kindergartens. 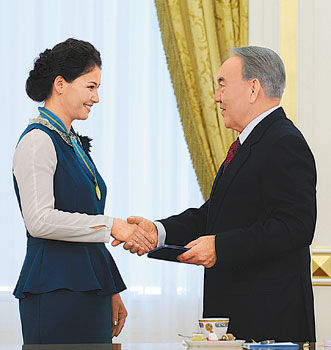 “In accordance with the Employment 2020 programme, the proportion of women receiving small business loans has risen to 40 percent. The number of women in business is growing steadily, and their contribution in the GDP is nearly 40 percent,” the President noted.

He said the main objective of Strategy 2050 was to make Kazakhstan one of the 30 most developed and competitive nations in the world. “We have sufficient pre-conditions to do it,” he said. “Our positions are rising on global indexes. Kazakhstan now ranks 31st among 135 countries on gender equality.”

Women make up more than 55 percent of the country’s management force, well ahead of the global average of 21 percent, the president said.

In the most recent national performance assessment of police officers, women showed the best results. One of them, Valentina Oleshkevich, a senior police officer in Semey’s task force to fight organized crime, attended the Akorda meeting.

Around the country, 260 women serve as akims (mayors) of different levels Among those attending the meeting was Azia Kystaubaeva, who runs the Sunakat district in the Kyzylorda region and under whose leadership various social facilities have been built in her village.

The President also praised Nazymgul Kuangan, who in 2010 gave birth to quadruplets. Her family was given a three bedroom apartment in Almaty.

Marina Wening, an English teacher at the Enbek School in North Kazakhstan told the meeting she had long wanted to meet the President and her wish came true on that day.

Gaziza Ryskulova, a welder at Trans Asia Construction LLP, said she preferred her work to staying in an office.

President Nazarbayev said the women of Kazakhstan were the bulwark of its peace and harmony and the faithful guardians of its national values. “May your hearths and homes be always bright,” he said.

“On March 1, I signed a decree establishing a new holiday, Family Day, on the second Sunday of September. We must strengthen the value of the family, as the state begins with it,” the President said.

Nazarbayev awarded Samal Makatova, 32, and the mother of seven children with the Altyn Alka gold medal. “With this award, I thank every woman, every mother for the love, care and attention that they give to the world,” he said.