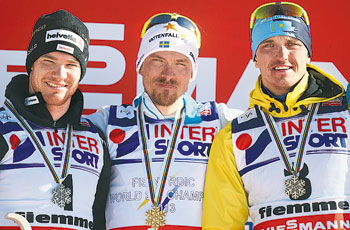 Kazakhstan’s champion skier Alexey Poltoranin won the silver medal in the 15 km (9 mile) race in the 13th stage of the World Cup which was held on March 9-10 in Lahti, Finland.

Poltoranin had an almost perfect start into second place. Later, he fell back to sixth place but fought his way back to the second spot.