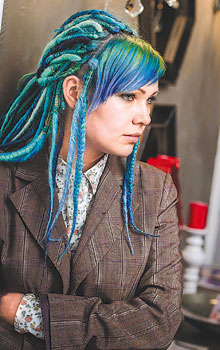 Both guests and participants of the event enjoyed the evening of poetry.

ASTANA – On one night in early March, with the lights dimmed and the stage set in a newly opened café, a community of strangers enveloped deep into words of love, grief, soul-searching and self-expression.

Approximately 50 people came to watch as the new talent flooded the recently opened Chekhov café with passion and energy. While it may not have seemed so to the passers-by, the importance of the event could not be underestimated.

The purpose of the event was to bring together authors of poetry, short stories and other literary works and let them share their work with people who value the culture. The event was free of charge, and those who wished to perform on stage could do so by submitting their names to the organizers. By bringing together original content, sharing it with fellow citizens, the organizers hoped to foster the creative potential of the city. In the future, a compilation of works will be published to show the world that prose and writing are not only developing, but also thriving here in Astana.

The mission of the event was supported by Aizhan Berdina, co-owner of the newly opened café, affiliated with the café of the same name in Almaty. 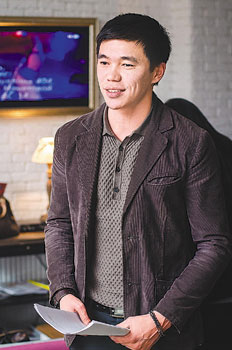 Chekhov’s central location in Sary-Arka, one of the popular malls of Astana, as well as its sophisticated design provided an ideal space for a gathering of literary artists. And of course, the very name Chekhov automatically brings to mind the masterful short stories of the 19th century author and physician.

“This is the first time we’ve ever done something like this in Astana, please be lenient towards us,” Sarybay said, holding a microphone and trying hard not to show his nervousness. As the evening progressed, the barrier between stage and audience broke down and disappeared making everybody feel like a star and the subject of the lines of the authors.

Anuar Duisenbinov started his performance with an illustrative statement. “Have you come here to eat and talk?” he asked, with much frustration. After letting the crowd know that he will not abide such rude behavior at a poetry reading night, all eyes turned to the stage. Duisenbinov had all the ears. If culture is to be respected, it must be respected with sincerity. The people who arrived and told stories, shared their poems were giving bits and pieces of themselves to the people. Duisenbinov set the tone with a very clear understanding of culture that he managed to convey in his own unique style. 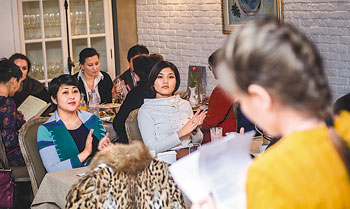 Other participants of the event included Andrei Yaroslavtsev with a very fiery performance, Olga Nekrashevich, a guest in Astana from St. Petersburg, Alexandra Proschenko who has made everything around her seem minute, Kanat Omar with a confident, sometimes shocking, attitude and Dido, editor of “Dialogue” literary magazine. The most popular act by far was the audience sweetheart, Daniyar Alshinov. “I only write poetry when I break up with a girl,” he told and everybody started laughing. The feeling of closeness in such a diverse and random environment is something to be wondered.

Special guests who also said a few words to those who came were cultural authorities in their own right. Professor Leyla Makhat delivered an impromptu poem and Bakhyt Kairbekov, a famous Kazakh poet, screenwriter, and film director, gave a few words of advice for the future of the young participants and thanked everybody who pays tribute to works of art, especially those produced in Astana. Finally, the last word was given to Anisa Berdina, Director of the “Kazakh TV” Channel, part of the Khabar agency, who came scouting for talent, thanked the owners of the venue and everybody involved in the project.

The importance of such nights for the cultural life of Astana is unquestionable. Nothing can compare with the feeling of satisfaction after such a culturally filling evening. The organizers are planning to hold such events on a monthly basis, preliminarily setting the date on the first Tuesday of every month. The first literary night at the Chekhov café can be considered a dip into the ocean, the depths of which are yet to be explored.