By Nadezhda Khamitova in Tourism on 27 March 2013 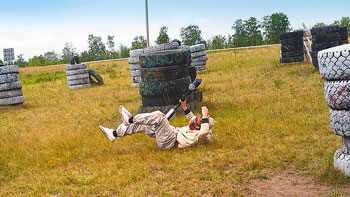 Paintball is a an active sports and a “stress killer” for people, who are not afraid of bruises and looking for great memories.

ASTANA – Paintball has found a home in the capital of Kazakhstan.

Paintball is a team game, where players are eliminated or “killed” when they are shot with gelatin “bullets” – capsules containing paint. The aim of the game is to eliminate all opponents by marking them with paint. Each player has a gun called a paintball marker.

A game can be played indoors and outdoors but most players prefer outdoor action on natural terrain.

Design of the playing area depends on the scenario for the game. Military and terrorist themes often involve the use of a bus and tires as shields for players. A popular version focuses on the capture of the opposing team’s flag defended in stylized forts. The length of the games can vary. In major championships and tournaments they can last all day.

To date, more than eight paintball clubs operate in and around Astana including The Attack, Blockpost, Snipers, Shooter, Patriot and Barys.

Blockpost offers its players two versions of the game, Autodrome and Fort which is designed for a maximum number of 60 players. 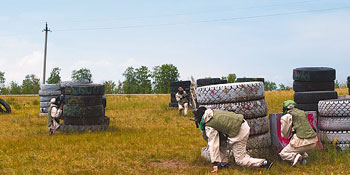 Blockpost’s playing area is on the steppe about 20 minutes of driving outside Astana. Games are played through the summer and even much of winter. Participation in a game costs 3,000 tenge ($20) per person, covering 1,500 tenge ($10) for two hours of game time, including the renting of uniforms and providing an instructor, and 1,500 tenge ($10) for 100 gelatin bullets. The club’s website at www.bpost.kz provides all necessary information on location, prices and additional services.

“I am a fan of paintball. It’s painful sometimes but for me the most important thing is to feel the adrenaline in my blood, the fun of unity with the team and the joy of scoring a goal,” Aiman Khamzina told The Astana Times. “After the game, I go with my friends to the barbeque. It’s all a much more interesting way to spend the weekend than just drinking tea at a cafe.”

“For me, the game is a cure to the stress of work,” Alisher Begasymov told The Astana Times. “I have tons of energy but the volume of work I have sometimes doesn’t let me enjoy meetings with friends. A few hours spent outside playing paintball recharge me and my friends for the whole week.”