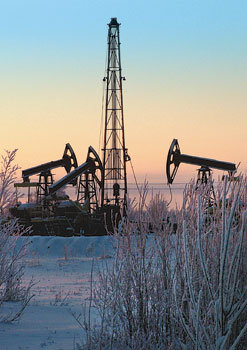 KMG plans to expand its geological surveys on land and offshore to find new oil and gas fields in the nearest future.

This was announced by KazMunayGas Deputy Chairman Magzum Mirzagaliev during a forum of oil and gas companies “Oil and Gas: Local Content” which took place in Astana on Feb. 14.

Kazakhstan is developing many of the largest oil and gas projects in the world including the Tengiz field, the Karachaganak gas condensate field, the Kashagan super oil field in the Caspian Sea, and the oil pipeline linking Atyrau with Russia’s Novorossiysk seaport.

In his annual state of the nation address on Dec. 14, President Nursultan Nazarbayev spoke about the results achieved over 15 years since adopting 2030 Development Strategy of Kazakhstan and the great potential to further expand the nation’s oil and gas and mining sectors.

“We aimed to achieve feasible, sustainable and growing rates of development. We managed to achieve this goal in the shortest historical period. It was Strategy Kazakhstan 2030 where the focus has been shifted towards economic growth. As a result, within 15 years our national economy grew from 1.7 trillion tenge in 1997 up to 28 trillion tenge in 2011,” the president said. “Over these years our oil output grew three-fold, natural gas output increased five-fold. We have channeled those commodity incomes into our National Fund. The National Fund became a reliable shield to protect us from possible economic and financial disturbances. This is a safeguard for current and future generations.”

On Jan. 11, KazMunayGas (KMG) discussed the new national Strategy 2050 at a conference of its senior management of KMG and subsidiaries.

KazMunayGas Chairman Lyazzat Kiinov told the conference that President Nazarbayev had clearly determined the new political and economic development course for the state through the new national strategy.

“KMG is the national holding company. It participates directly or through its subsidiaries in the implementation of large-scale hydrocarbon projects. It has been given a special role in implementing specific aspects of the national strategy,” the KMG chairman said.

In his address, President Nazarbayev noted that the world’s multinational energy corporations are currently working out their development strategies for half a century ahead. KMG is planning ahead too. It has adopted its 2022 Development Strategy and has established qualitative and quantitative indicators that provide for sustainability and boost the economic performance of the entire company.

KMG plans to expand its geological surveys on land and offshore to find new oil and gas fields. It is going to increase its production of oil and gas, create a flexible oil and gas transportation system, increase the capacity of its refineries and improve the quality of its oil products. It is also going to create an effective and transparent asset management system, fulfilling a series of presidential directives.

“In the next 10 years, KazMunayGas will stabilise the production level of its extraction operations, working with its partners and subsidiaries. And it will increase its total crude oil and gas condensate output to 35.4 million tons per year (mtpa) from 21.1 mtpa in 2011 thanks to the Tengiz, Kashagan and Karachaganak projects,” Kiinov said.

Kiinov said oil production was being increased in the Atyrau region’s major projects.

“Oil production from Tengizchevroil will be increased to 38.6 million tons (per year), thanks to the implementation of the Future Growth Project. KazMunayGas has a 20 percent share in this project and will get 7.7 million tons of oil (from it),” he said.

The Kashagan oil field is scheduled to come online in June and to produce 13 million tons of oil per year by 2015. KMG’s 16.81 percent share in the field amounts to 2.3 million tons of that output. Eventually, oil production at Kashagan will increase to 51 million tons per year at its peak. KMG is also serving as an agent for the development of the Kalamkas offshore field.

Oil and Gas Minister Sauat Mynbayev said the Norway Statoil Company was withdrawing from the project to develop the Abay offshore oil block in the North Caspian Sea, after seven years of unsuccessful negotiations to start production. KazMunayGas would explore developing this site with another partner.

Mynbayev said Kazakhstan would not incur losses from Statoil’s withdrawal. KazMunayGas is entitled to a 50 percent share in all new projects in Kazakhstan’s sector of the Caspian shelf. Statoil was responsible for all expenses at the exploration stage of the project.

The oil and gas minister said Kazakhstan would quickly find another partner for the development of the Abay block.

Previously ConocoPhillips pulled out of the Kashagan development project. Experts believe the reasons were the expenses, which grew to $46 billion in the first phase and took eight years longer than planned.

Nadir Karimov, director general of the Oil Science and Engineering Centre at the National Engineering Academy believes the withdrawal of some Western companies from oil projects would not stop the development of the richest reserves of the Caspian shelf.

Kazakhstan is currently entering a new phase of developing the shelf and making increasing demands on the companies involved about the development timetables, quality and sustainability of their work. Some $90 billion has already been spent on constructing an extensive oil infrastructure there. Experts believe the Kashagan oil field will come online this year.

Analyst Rasul Rysmambetov said ConocoPhillips and Statoil’s withdrawals were for economic reasons such as the reallocation of corporate capital expenditures. He said other major companies with huge experience in offshore drilling wanted to work with Kazakhstan, including PetroVietnam and the China National Offshore Oil Corporation (CNOOC). Both companies have already sent delegations to Kazakhstan and studied its investment potential.

Marat Shibutov, an analyst with the Cross-Border Cooperation Association, noted that ConocoPhillips was spinning off all its assets in many countries, including Kazakhstan. He said Statoil may not have found the proposals of the Kazakh side attractive enough and that it may have regional political concerns and worries over the cost of extracting and transporting Caspian oil.

Kazakhstan’s Ministry of Oil and Gas announced recently that on Dec. 6, 2012 ConocoPhillips had requested permission to sell its 8.4 percent share of the North Caspian Project consortium to ONGC Videsh. The government of Kazakhstan is currently considering ConocoPhillips’s request.

In 2012, ConocoPhillips announced its withdrawal from its projects in other Commonwealth of Independent States (CIS) countries and from those in Algeria and Nigeria. The company has also withdrawn its capital from supporting Lukoil in the H project.

The Ministry of Oil and Gas said that, on Jan. 22, Statoil informed KazMunayGas by an official letter about its decision not to continue negotiations on the Abay project. Statoil said that in late 2012, the company re-evaluated the project and studied its high geological risks and rising capital costs to drill additional wells.

The Karachaganak gas condensate field will be developed in three phases, with a projected production of 10.1 million tons of liquefied natural gas (LMG) per year.

In addition, KMG as a participant in the Future Growth Project at Tengiz with a 10 percent share, will credit to its operational indicators up to one million tons of oil per year. Further expansion of annual production capacity is expected.

KMG plans to produce an additional 10.9 million tons of oil by 2022 by opening new oil fields including Urikhtau and the North Zhambyl, Zhemchuzhina (Pearl) offshore blocks and up to 13.9 million tons thanks to its subsidiaries and joint ventures such as the KazMunayGas Exploration and Production Company (KMG EP), Embamunaygas (EMG), Mangistaumunaygas (MMG), Karazhanbasmunay and others.

“In the refining sector, where KazMunayGas controls all three existing refineries in the country, we should move from raw material supplies to cooperation in the sphere of energy processing and exchange of the latest technology,” KMG Chairman Kiinov said.

“Production process modernization programmes are currently being implemented at the Atyrau, Pavlodar and Shymkent refineries,” he said. “The construction of the Aromatics Production Complex and Deeper Hydrocarbons Conversion Complex has started at the Atyrau Refinery, costing 1 billion tenge ($150,665,000). Major international engineering companies are participating in the project and we will get modern enterprises capable of producing raw materials for development of the petrochemical industry.”

Kiinov told the conference he had instructed all KMG’s refining divisions to ensure full control over their refinery modernisation programmes to completely meet domestic demands for fuels and lubricants and meet new environmental standards by 2025. He said KMG would boost its share in the local oil products market from 18 percent to 30 percent by acquiring new assets and constructing new service stations under the KMG brand name.

In the engineering industry, KMG plans to construct a ship-building/ship-repair plant in partnership with investors in the village of Kuryk, an industrial park in Znanaozen, a factory to make oil country tubular goods connections (casing, tubing and line pipes) and other oil and gas industry equipment.