By Svetlana Abenova in Tourism on 13 March 2013 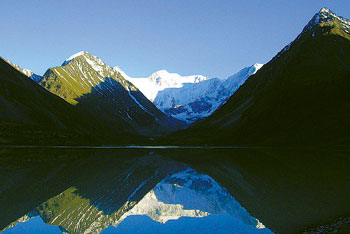 EAST KAZAKHSTAN – East Kazakhstan is a land of peaks and valleys, with heights ranging from 145 to 4,500 metres above sea level. The highest point is the peak of the famous Mount Belukha at 4,506 metres. Due to its unique geographic features and diversity of flora and fauna, the ancient Altai area has always attracted travelers from around the world.

Many new tourist routes have appeared in the region. In addition to Belukha Mountain there is also Mount Berkutal, rafting in headwaters of the Katun, White Berel and Ulba rivers and more.

The first programme for the development of East Kazakhstan’s tourist industry was prepared in 1992-1993 with the involvement of specialists in tourism and related disciplines. For the first time, they identified promising districts, tourist and excursion routes and developed activities for training personnel. However, the predominance of outbound tourism like shopping tours in the structure of tourism flows and the lack of incentives, especially financial support, for the development of inbound and domestic tourism made the programme unrealistic to implement at that time.

Now, horseback tours are especially popular among travelers on the Altai paths and the routes to Kokkol Waterfall.