ASTANA – The city of Astana on March 20 launched a unique light show that will run daily at 9 pm through April 1 in the square near the Baiterek Monument and at Lovers’ Park. 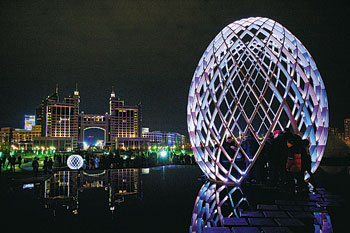 Guests and residents of the capital have an opportunity to witness a unique light show daily at 9 p.m. through April 1.

It is the first time any such lighting display was shown publicly in Kazakhstan.

The city akimat (government) prepared the event to celebrate the national holiday of Nauryz, the spring New Year, as a surprise for the city. The Lovers’ Park and the Baiterek monument were illuminated by thousands of brilliant lights.

The light show begins at both locations with musical accompaniment. The lighting cycle at Baiterek lasts 8.5 minutes and the entire display lasts two hours.

Baiterek is a tall tower with a sphere at the top representing an egg of the Samruk bird from a national fairy tale created by famous sculptors Moustafa Hadi and Paul Marchandise. Lighting designer Koert Vermeulen and scenographer Marcos Vinals Bassol created an animated, dynamic lighting programme for the tower. Vermeulen created visual and multimedia effects for the opening and closing ceremonies of the 2010 Youth Olympic Games in Singapore.

“I came here at the invitation of the mayor of Astana, to celebrate your national holiday Nauryz with you,” Verlmeulen said introducing the show. “The time is perfect for installing light because it is possible in these weather conditions to see all the power and beauty of our display. This young city and its amazingly beautiful architecture have inspired me and I have used Kazakh classical music as a background. You will also see the symbols and ornaments of Kazakh culture and decorations from the columns integrated into the light show.”

“To bewitch the crowds, we always experiment with new methods of visual designs, forms, technologies and materials from the unique locations where we work,” Vermeulen said. “We pay special attention to several key elements: originality, visual impact, uniqueness, and integrate our lighting with existing architecture. We play with new forms, technologies and materials. Combining our skills allows us to translate the artistic experience in order to create our unique vision of light and to create a work of art.”

The light show involves a combination of multiple lights. Powerful flashlights illuminate it with continual changes of colours. The show uses the latest lighting effects.

“The number 98 symbolizes the year Astana became the capital of Kazakhstan,” he said.

Vermeulen has developed lighting systems for buildings and locations including the Church of Saint Maryial, the De Klanderij, Optimum and Sanko Park commercial centres, La Defense in Paris and major parks throughout Europe, Turkey, Middle East and Asia. In April 2005 he provided the lighting for the Le Reve show in the Wynn Hotel and Casino in Las Vegas.

Vermeulen has also created light shows to honour King Albert II of Belgium and for the opening ceremony of Belgium’s six month presidency of the European Union in 2010.