ASTANA – Nauryz is celebrated in countries of Central Asia on the day of the astronomical spring equinox. In Kazakhstan, it’s an official public holiday, so the celebrations were held on main squares, parks and streets in all the regions and cities of Kazakhstan. The celebrations included concerts, shows, bike races, contests, trivia games, sport competitions, tree planting and holiday food fairs. Due to celebrations, March 21-23 were announced as days off according to Kazakhstan’s legislation. 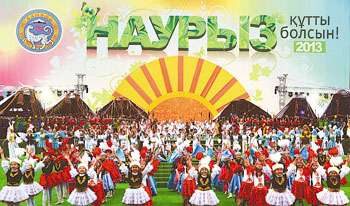 Nauryz celebrations were held on main squares, parks and streets in all the regions and cities of Kazakhstan, and included concerts, shows, contests, trivia games, sport competitions, tree planting and holiday food fairs.

Public celebrations started on March 21 in Astana. The celebrations continued on March 22 next to the city administration building, in the Lovers Park and in other parks of the capital. The main events took place next to Kazakh Eli monument (Kazakh land in Kazakh), in which four hundred performers took part.

“I congratulate all the people of Kazakhstan on this wonderful holiday. All offenses are forgiven on this day. Families and friends meet and ask each other for forgiveness, wear their best clothes, go out, plant trees, clean up springs and streets,” Nursultan Nazarbayev said addressing the participants of celebration at Kazakh Eli square in Astana.

On March 19, an exhibition of contemporary art called “Golden Collection of Names” took place in Astana organized in collaboration with the Metropolitan Museum of Modern Art and the Karaganda regional museum of fine art. The exhibition featured 52 works created from 1930 to 2012. On the next day, a unique light show started, which will fascinate guests and residents of Astana until April 1.

Five thousand people gathered in Almaty for Nauryz celebration on March 22. People crowded the whole Astana square and the celebrations got underway outside the square, where residents were entertained by taking short rides on horses and camels. The celebrations included a fair of jewellery, paintings and souvenirs. Celebrations also included the shows and contests, competitions of the national singers and national dances. The cooks presented different recipes of the “Nauryz kozhe” dish: some of them were made of sour milk and groats and some included meat.

Young people enjoyed traditional Kazakh swings called Altybakan. The construction was strong enough to hold 10-12 people at a time. Children competed in shooting toy bows, while adults took part in sports games. Many of them wanted to recall the childhood by playing “assyk”, an ancient bone-throwing game. Young people competed in lifting 24kg kettle bells; some of them managed to lift them over 40 times.

While major celebrations of Nauryz were only coming to residents of western Kazakhstan, and Mangistau in particular, many people there have already celebrated “Amal meiramy” (forerunner of Nauryz) on March 14. Traditionally, Kazakhs of the western territories were the first to mark the coming of spring. They would then pass congratulations on to their relatives in other regions. One of the main parts of the celebration is the “korisu” or handshake. Historically, on this day, residents of western Kazakhstan visit elders to greet them with a handshake, ask for blessings in the new year and wish them good health. This day is also traditionally seen as a day to forgive grievances against others.

Residents of the South Kazakhstan region celebrated the Nauryz holiday in a new way. Celebratory ceremonies start nine days prior to Nauryz as every day has its own significance. Governors, heads of cities, districts and villages will congratulate war and labour veterans on the first day of celebration. Members of youth communities helped senior citizens with household duties. “Memorial Day” is the second day of celebration. The commemorative dinners held in the memory of the border guards killed in the airplane crash in December 2012. In addition, the national aitys contest dedicated to the 350th anniversary of the Tole bi district and the 300th anniversary of Abylai Khan began on this day.

In Kostanay, to mark the celebration of Nauryz on March 19 an exhibition was organized, which included products from 120 local producers of agricultural goods from the regional centre and the districts. The fair attracted visitors with low prices on products, almost 20-30 percent below the current market prices.

In Aktobe, on March 20, women with many children were awarded the state awards under thof presidential decree. Four mothers of large families were given “Altyn Alka” gold medals and five women received “Kumis alka” silver medals.

On the first day of Nauryz, in Taldykorgan, elderly people were given presents, while on three streets of the city “white-winged yurts” were installed so anyone could taste the koumiss (mare’s milk) and Nauryz kozhe (Kazakh special milky soup). Beautiful women in bright costumes delighted guests with folk dances.

In Ust-Kamenogorsk, youth constructed a yurt, which represented not only Kazakh national culture, but also contemporary popular forms of street art. Exhibitions of clothing and cuisine were organized with different types of national cuisine offered to the guests of celebrations. For the talented young people, a karaoke contest was held.

Nauryz was also celebrated in a special way abroad, for example, “Nauryz-2013” holiday took place at “Rossiya” concert hall in Moscow. The Moscow-based foreign embassies and cultural associations arranged the event with the support of Moscow authorities. Dancers and singers from CIS member countries as well as from Kazakhstan delighted the audience with their performances. Within the festivities, the guests were able to attend a traditional fair and savour delicacies of the national cuisine of various nationalities.

The tradition to celebrate Nauryz with a very festive gala event, launched two years ago in Washington, continued this year with a major gala at the Organization of American States (OAS) historic building on March 17. U.S.-based Nauryz Commission, a multicultural not-for profit organization established for promoting Nauryz in the United States hosted its second celebration of Nauryz at the Library of Congress, which coincided, with the first anniversary of the Commission. Special highlights of the celebration included a message from President Barack Obama delivered by Valerie Jarrett, senior advisor and assistant to the President.

The Kazakhstan Embassy in Turkey held the Nauryz celebrations on March 20, with guests of the event including heads of state agencies in Turkey, members of Parliament, ambassadors of Azerbaijan, Belarus, Turkmenistan, Uzbekistan, representatives of culture and arts, public, and academic circles.