By Maral Zhantaykyzy in Culture on 13 March 2013

ASTANA – On Feb. 22, the Kazakhstan TV channel and Zhas Otan, the youth wing of the Nur Otan political party, organised a charity concert, “Heart to Heart,” at the Kazakhstan Central Concert Hall in support of a small child with a rare bone disease. 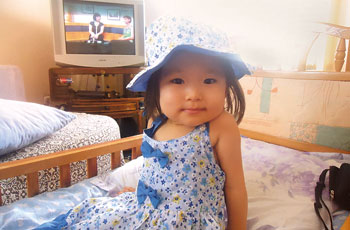 The four-year-old girl, Aruzhan Orazbekova, suffers from osteocytes, which makes her bones so fragile that she cannot walk on her own and has trouble with basic movements. Her parents can’t even carry her in their arms for fear of hurting her. To date, Aruzhan has had about 45 fractures. Unfortunately, Kazakhstan’s doctors cannot help her—but specialists at the European Medical Centre in Moscow treat children with her condition. Moscow surgeons have declared their readiness to perform surgery on Aruzhan and predict a good chance of rehabilitation. The cost of multiple courses of treatment and surgery is four million tenge, which Aruzhan’s parents cannot afford.

So in addition to the Feb. 22 concert hall event, other charity concerts organised by youth movements in support of the little girl were launched in Pavlodar and Uralsk.

In January, the Kazakhstan TV channel reported on Aruzhan on the Zhan Zhyluy Show (“Warmth of Spirit”). Immediately after the broadcast, people from all over the country started calling Aruzhan’s parents to offer moral and financial support. Abinukas LLP Director Bauyrzhan Kassenov transferred 100,000 tenge to the family’s bank account. People across the country contributed according to their abilities. To help create a structure for collecting donations, Zhas Otan organised a charity concert.

“We are all from one house, one family. When misfortunes come and disease makes an attempt to attack, we come together to defeat it and we have nothing to fear. ‘If you share joy, the joy is doubled; when you share grief, it decreases,’ says a Kazakh proverb. I thank you for coming today,” Deputy of the Mazhilis of Kazakhstan Orazkul Asankyzy said at the opening of the concert.

“In this hall people have gathered who believe in the possibility of healing and a brighter future for Aruzhan. After the first airing of Aruzhan’s story, after only two days, 500,000 tenge was transferred to her family’s account from people like you. This first contribution has given them hope for the future,” chair of the board of the Kazakhstan TV channel Nurzhan Mukhamedzhanova said.

“The Zhan Zhyluy Show first aired in 2009. During this time, we helped raise money for the surgeries of six other children; eight families from Almaty and Mangistau, supported by local akimats (city halls), received housing and 17 children found the new loving families. I think the television show, which airs only once a week for 30 minutes, has a huge social impact and good results. Our work is evaluated by your participation. Belief in the good gives us strength,” Mukhamedzhanova added.

Artists from the bands Garysh and Dabyl participated in the concert along with well-known singers Kydyrali and Karakat, Dosymzhan Tanatarov and Ibraghim Iskendir. Even little six-year Bibimariam Omarova, who won the international competition “Happy Childhood” in Los Angeles, came to support her young fellow countryman.

Aruzhan’s mother, Gulnaz, tearfully thanked all the participants at the event. “I want to thank everyone who responded to our trouble. Thank you for your good deeds, for your attention. I want to thank the Kazakhstan channel, Astana akimat and Zhas Otan. I want to thank Maslikhat Deputy Arnur Iskakov individually. Being confined to a wheelchair himself, he decided to help Aruzhan. Arnur was one of the first to respond, actively calling for Internet users’ participation through social networks,” she said.

The organisers managed to raise the necessary funds and on February 26, Aruzhan and her parents flew to Moscow for treatment.