PAVLODAR – AKTAU – KARAGANDA – Kazakhstan’s middle class – the main social base for further development of the country – is growing in strength. 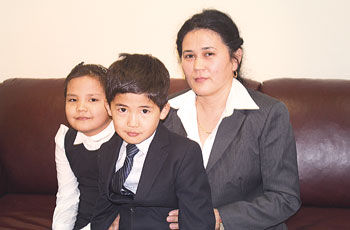 Gulshat Ismailova believes she and her husband earn enough money not only to raise two of their children, Aigerim and Daulet, but also to have a third child.

In Western countries, the middle class accounts for 60 percent of the total adult population, well above the current level in Kazakhstan. However, in keeping with the strategic objective set by President Nursultan Nazarbayev to make this country one of the 50 most competitive economies in the world, the government is actively pursuing policies to expand the middle class and expand its role in the community.

What is the middle class in Kazakhstan? Who belongs to it and what are its main identification characteristics?

English teacher Yekaterina Shevchenko told The Astana Times her family was not securely in the middle class. She said her family was not rich, “though it cannot be referred to in the category of poor either.” this Pavlodar resident said the classical definition of middle class implies some financial stability and equity, which her family does not yet have.

“Of course, we do not live in poverty,” she said. Her family consists of herself, her husband Alexei and their 11-year daughter. Her husband is an electronic engineer and a university graduate with an honors degree. But he must work at two jobs to support the family receiving a monthly income of 90,000 tenge ($596.42). Yekaterina Shevchenko is also busy, working at two jobs: She teaches English language courses and private lessons (tutoring). Her monthly salary is also 90,000 tenge ($596.42).

The family has a two bedroom apartment, purchased in 1998, after their wedding. Six years after their marriage the couple bought a country site with a house. Alexei originally had a used car, which was periodically replaced by more recent models. They currently drive a 2004 model.

The family has a refrigerator, a TV set and other appliances and standard furniture in their flat. They bought them all for cash, as Alexei does not like buying on credit.

“Most of our total monthly income is spent on food and utility payments,” Shevchenko said. “The utility expenses together with the fee for the parking lot cost about 25,000 tenge ($165.67), without considering expenditures on gasoline.”

“We do not have enough money to travel abroad,” she said. “For our holidays, we go to the Borovoye resort, Bayanaul or Bukhtarma. We are also careful about our health, as serious treatment requires considerable resources.”

“I do not buy expensive or styled clothing in the retail trade network. We use online shops, as, for example, it is cheaper to buy clothes from the U.S. through the Internet,” Shevchenko said. “I do not know what category of people on income and living standards is referred to the middle class but it is most likely that our family can be considered as middle class. We have everything for everyday life. What additional criteria are needed?”

However, she then added, “I do feel concern about the future, as our current salaries do not guarantee stability and may change at any time. We also need to think about saving to give decent education to our daughter.”

Gulshat Ismailova from Aktau dreamed of becoming a doctor, but did not pass the second round of her exams and was not admitted. Her father advised her to become a geologist. “Why not,” she asked herself. “That is a very suitable profession for the Mangistau region.” With help from her father, she entered the Institute of Geology.Gulshat enjoyed her early field work in the mountains. They studied rock ores and in the evening sat around campfires singing hiking songs. They dreamed of opening new fields with huge oil and natural gas reserves.

After graduation Gulshat came to a research institute and plunged into scientific work. Her earlier image of a geologist was associated with a weather-beaten face and a huge backpack but she learned that a modern geologist often wears a business suit and uses a laptop. At first, she worked as an ordinary researcher, then as a senior one. Now, she is the head of the geology department at a major oil company.

“I do not complain about my salary,” she said, “Of course, when I started my career, I had to save money and deny myself some things. Now, our family can afford major purchases.”

Gulshat has no doubt that her family belongs in the middle class. “This is the driving force of the economy. And of course, I include my family in it. After all, what do we mean under this term? These are the educated people who benefit our society, produce things and bring new ideas to production. And, accordingly, the work of such professionals is well-paid.”

Gulshat believes the middle class are people who do not worry about the future of their children because they can provide decent education for them. Gulshat and her husband are proud of their two children, their daughter Aigerim, a fourth-grade student and their son Daulet who is in second grade. Her husband has a construction worker degree. He has fulfilled his life’s dream and became a private businessman.

The family can afford trips abroad, but they still prefer to stay in Kazakhstan. Every summer, they try to go to Almaty.

“For me, the material aspect is not the main thing,” Gulshat said, “I do not seek luxury and what I earn is enough for me. My husband and I have a sustained and stable income. I’m sure that even if we want to have a third child, my husband will fully support our family. But still I want to be fulfilled in my profession.”

Serikzhan Zhakenov of Karaganda is an engineer and a director of the KarGorMash-M Company. He is not rich by Western standards. But he is financially independent and regards himself as middle class.

Zhakenov has his own opinion: He defines members of the middle class in Kazakhstan as “those people who are optimistic about the future: they know what to do and with whom to work. They boldly plan their life.”

“I know already what I will do in a year or two, because I know how to achieve that goal,” Zhakenov told The Astana Times. “I do not have huge capital, but my financial status and income allows me to organize my life in keeping with my idea of style and comfort.”

Zhakenov’s wife is now in retirement. They live in a house which they built on a plot of land which they planted with hundreds of trees and decorated with lawns. Their son lives independently with his family in Astana.

Zhakenov takes pleasure in the success of his company and enjoys his work. On holiday, he and his wife travel abroad, often to the Czech Republic and Germany. A graduate of the Karaganda Polytechnic Institute, he is grateful to it for an excellent education. With 40 years of experience as a mechanical engineer he puts his heart and soul into the development of his business. The country’s stability and security are very important for him.

“The welfare of the state depends on the middle class and it prevents a wide gap from developing between the rich and the poor,” Zhakenov said. “The state only benefits by creating conditions for this layer of society. I think that this category should also involve representatives of the civil service and from small and medium sized businesses. So far, teachers, doctors and the self-employed, unfortunately, do not yet belong to this social class.”

Talgat Doskenov, president of Kazakhstan Association of Entrepreneurs and director of the Atameken Union in the Karaganda region told The Astana Times that the middle class is also the foundation of a market economy. This includes those who can afford the construction of their own house, who own one to three cars and who can equip children with a good education abroad.

“Of course, the income determines the social status,” Doskenov said. “A highly-qualified lawyer, coach or businessman involved in the transportation industry or a retired person who owns five to seven flats and rents them out on lease can all be referred to as belonging to the middle class.”

The middle class gives society the major advantage of psychological stability, Doskenov said. “This population stratum does not usually participate in protests and does not erect revolutionary barricades. The middle class is the foundation of the economic and political well-being of the state.”

A decade ago, in his interview with the international business newspaper the Financial Times, President Nazarbayev said “We now want to create a society where the upper level accounts for 10-15 percent, the lower, perhaps for 10-15 percent, and the middle class between them should make up 60-70 percent.”

The president’s plans have become reality. In the past decade, the average salary in Kazakhstan in dollar terms has increased by 440 percent. People have more opportunities to use public goods, make expensive purchases, travel and have savings in the bank accounts.

During this decade, the gap between the wealthiest and poorest layers of society declined.

The Gini Coefficient is used by sociologists to measure the distribution of income in any society. The closer the index is to zero, the more evenly incomes are distributed; and the higher the index rating, the more incomes are concentrated in the hands among a small wealthy elite.

Kazakhstan’s Gini Coefficient gives it the most equal distribution of incomes among the 12 nations in the Commonwealth of Independent States and puts it among the 50 fairest countries of the world in its distribution of national wealth.