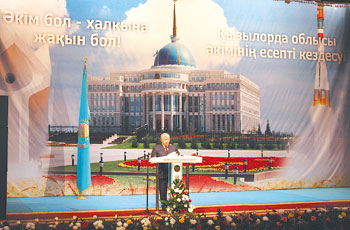 Krymbek Kusherbayev addressed the issues of most concern during his report to residents of Kyzylorda region.

First, Kusherbayev is trying to revive the long-famous fishing industry in the Aral Sea, which was for generations a rich source of fish. Some 20 species were identified by biologists, including sturgeon and catfish. Today, fish caught there are exported from the Kyzylorda region without any processing. There is no coordination between fishermen, food processers, distributors and the officials who issue the license quotas. So the governor is trying to create a new system for fishing development.

Kusherbayev is also trying to end a long deadlock that has delayed for years the construction of a new glass production plant by the Kazakhstan Glass Company (KGC) in a joint venture called PKZ with the Pilkington Company. Tenders were issued and construction work was originally due to begin in summer 2007. Funding for the project was provided in part by the Investment Fund of Kazakhstan and the Development Bank of Kazakhstan. However, the company could not reach agreement with the local authorities on some issues and decided to transfer their production line to the Aktobe region instead.

Kusherbayev hopes to revive the project. He has raised the issue with President Nursultan Nazarbayev and won government approval to reconsider the location of the plant.

The Kyzylorda region has rich raw mineral reserves. It contains 15 percent of Kazakhstan’s zinc, 9.6 percent of its lead, 13.7 percent of its uranium, and 4.7 percent of its oil and gas.. However, there have been difficulties in reaching agreements to create the necessary plants to extract and process these resources

Kusherbayev said the mineral processing industry in the region was still poorly developed. He said a new project was planned to mine the vanadium reserves in the Shiyeli area. The Balausa Company has started work at the Balasauyskandyk ore field and is using extracting the ore from black shale in a 35 billion tenge project that will eventually extract 800,000 tons of vanadium. The mining project in the region may be expanded to produce up to 150,000 tons of ferroalloy and 12,000 tons of sulfur concrete and silicon carbide.

Kusherbayev said the region also suffered from a lack of hot water supplies to many homes. He has launched a new programme using regional funds this year to provide all multistory apartment buildings with hot water. Heating systems for homes have been redesigned to heat water as well as living space. Starting in 2014, the programme will also receive state funds.

After the mayor has finished the report, citizens got a chance to ask Mr Kusherbayev on issues of their particular interest.

Nurlan Akhmetov, resident of the main city of the region asked about the future of the local football club “Kaisar”, which has also been mentioned the report. As Mr Kusherbayev has stated, all issues of the club are solved and he is looking forward seeing it in the premier league again. Though, he admits that the financing of the club should not be connected with the regional budget. He offered major oil producing companies to support financially the “Kaisar” club.

The other issue raised by Adilbek Aimbetov, who asked about the progress of building housing for young specialists, social conditions of residents of Saksaul station and establishment of the recreation zone at the Kambash lake.

“Budget has been already allocated and in the next year 30 houses to be built for young specialists. Regarding Saksaul station we have talked with President of National Company “Kazakhstan Temir Zholy” Askar Mamin. I suggested moving main production departments to Saksaul station, since at a number of factories at Kazaly and Shieli stations the cuts of staff to be held and those professionals should be employed. We have reached common ground on this question. A number of social objects are to be built, which will be financed not by regional budget but by Kazakhstan Temir Zholy company,” said the head of the region. “Kambash is a unique lake and I believe it is necessary for touristic recreation to be created there. This issue has already been discussed and has received a positive approval of regional administration.”

Chairman of Uzbek national and cultural center Ashur Khamidov asked about the House of Friendship. The project has been introduced a couple years ago. The House should have united representatives of all national and cultural centers of Kyzylorda under one roof. Mr Kusherbayev has approved that the project is underway and to be completed in two years.

On the question of Abkhantay Prnazarov, pensioner, regarding the lack and condition of municipal transportation, the mayor has answered that “money are allocated for acquisition of 22 buses and by the end of the year 50 more will be bought.”

At the end of the meeting Krymbek Kusherbayev thanked citizens and his colleagues for coming. “There is no problem that cannot be solved by the united community” mayor said. “I want to call those who work with me in the government – employees of local executive bodies, representatives of national bodies. Dear colleagues! Each of us must constantly ask ourselves: what citizens think about us and our work? I wish success to all of us, prosperity to our independent republic, and happiness to every home,” Kusherbayev concluded.