By Askar Beysenbayev in Sports on 27 March 2013 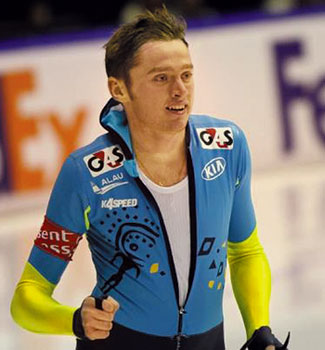 Kuzin is the main hope of Kazakhstan’s speed skating.

ASTANA – One by one, Kazakhstan’s athletes are claiming their space on the world stage. The young nation’s newest sporting first comes in speed skating: for the first time in Kazakhstan’s speed skating history, a native son has brought home a gold medal. Denis Kuzin of Kostanay became the world champion in the 1,000 metre distance at the World Single Distance Championships that started on March 21 in Sochi, Russia. Kuzin started in the ninth pair and finished in 1 minute, 9.14 seconds, while Olympic Champions Mo Tae-bum (South Korea) came in a close second and Shani Davis of the United States took third.

Two weeks ago, in the finale of the Speed Skating World Cup, Kuzin won a place at the upcoming Olympic Games in Sochi. Today’s victory raised the skater from Kostanay to the status of main contender at Sochi in 2014.

Kuzin has been participating in world championships as part of Kazakhstan’s national team since 2007. In 2011, he won gold at the Asian Winter Games in the 1,500 metre distance. Last summer, Kuzin injured his shoulder and took a sabbatical. His coaches persuaded the athlete to return, a risk that now seems justified by his new gold medal, which represents a significant achievement in history of professional sports in Kazakhstan.