ASTANA – The first full-length 3D animated film ever made in Kazakhstan premiered before the Nauryz holiday on March 21. 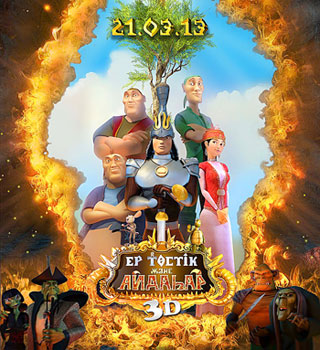 The film, called “Er Tostik and Aydahar,” is based on the Kazakh national fairy tale called “Er Tostik.” The project was a cherished dream of veteran director, 64-year-old Zhaken Danenov. It took three years to make with a production team of 50 people and cost $1.2 million.

The film tells the story of Bapy, the khan of the underground world, who has a plan to swallow the sun, the egg of the Samruk bird. Then he will put the world in eternal darkness and expand the borders of his kingdom. However, Khan Bapy knows that once in a thousand years a batyr (warrior) is born who can stop him. Bapy does everything he can so the warrior will not be born to foil his evil plans. But the warrior Tostik is born anyway and grows by leaps and bounds. Soon the bird Samruk has to lay a new sun-egg before the final battle with Aydahar (the great sky dragon) that will decide the fate of all humankind.

“The idea of making an animated film based on the Kazakh fairy tale came from the film studio management,” director Danenov said. “At the beginning, I worried that after a long period of stagnation in the Kazakh film industry, it was risky to start the production of animated films from scratch. But looking at the confidence of the management and the grandiose scope with which Yermek Amanshayev (director of Kazakhfilm studios) has fostered the rise of the Kazakh cinema, I decided to take part in this project.”

First, it was decided to shoot the movie in a regular format. Then, the director and his team had the idea to produce it in the now popular 3D format. An Almaty private studio team working under a talented, young director called Rustam Turaliyev made the adaptation.

Turaliyev had a background in advertising and has worked in an animation studio in Moscow for years where he mastered 3D technology. He and Danenov recruited a talented group of young production editors and technicians well versed in the Kazakh language, culture and traditions. The screenplay in Russian was edited by the well-known playwright Lavrenty Son. Graphics of the national 3D cartoons soon to stand in one line with those produced in Western countries.

Kazakhfilm has planned a major promotional campaign for the film and is releasing a new line of merchandising products including comics, exercise books, diaries, clay models, watercolour paintbooks, and albums featuring its characters.

Kazakhstan animation was created half a century ago. The first cartoon made in the country by pioneer animator Amen Khaydarov was called “Why is the Swallow’s Tail U- Shaped?” It won international prizes and enjoyed commercial success, being shown in 48 countries. Since then, the animation division of Kazakhfilm has grown from six to 60 people. Most of them are graduates of the Almaty School of Art and the All-Union State Institute of Cinematography (VGIK).

After the collapse of the Soviet Union, the making of animated films almost stopped. It fell to a rate of only one or two short cartoons per year. American, Japanese and Russian cartoons filled the country’s TV screens. However, Kazakhfilm is now expanding its production of animated films.

The new wave of animated films being produced focuses on two themes, folklore and contemporary subjects. The work is supported by the government under its Cultural Heritage programme.

In 2010, Kazakhfilm created a new production unit using advanced technology and started recruiting a new generation of animators. The unit will also be used to create special effects for regular films.