ASTANA – The best falconers from across the Kazakh steppe gathered in the Almaty region’s district of Nura Feb. 21-23 for the annual National Berkutchi (falconer in Kazakh) Championship Sonar 2013. 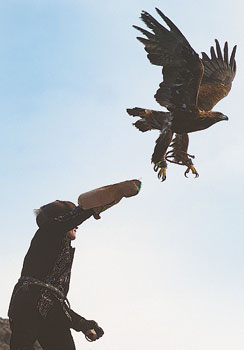 The championship is organised by the Kyran Federation with the support of the regional governor’s office and the Kazakhstan Agency for Sports and Physical Training.

Traditional hunting with birds remains popular among the people in Kazakhstan: the championship was held this year for the 16th time.

A total of 42 falconers from Astana, Akmola, Atyrau, Zhambyl, Pavlodar and Almaty regions came to take part in the tournament, bringing 39 golden eagles and three hawks.

Golden eagle hunting is one of the oldest methods of food hunting. Kazakh ancestors in the Eurasian steppe mastered eagle hunting several thousand years ago, back in the Andronov Age, and depicted it in Bronze Age petroglyphs. In Aktobe Gorge in the west of Kazakhstan a second “Golden Man” has been found, buried with his precious golden eagle.

In the past, hunting birds were extremely expensive: a golden eagle could cost five or six camels and a falcon cost one or two camels. 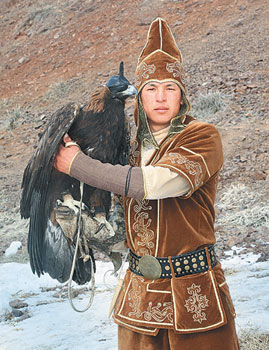 Golden eagles are very rare birds and are included in the Red Book of Kazakhstan. The Berkutchi Museum, 160 kilometres from Almaty, is dedicated to the history of falcon hunting.

Hunting with these birds is one of the most unique features of Kazakh life, but it is not a simple thing. Expertise in wild bird training was gained by Kazakh berkutchi over centuries, the secrets imparted from father to son. Now, only a few hold these secrets.

Today, in Kazakhstan there are about one hundred berkutchi, masters with an innate gift for wild bird training.

When training a young eagle, the berkutchi must sacrifice his sleep for a long period. The growing bird must be rendered sightless under its hood for weeks until its dependence on its master becomes complete. Such intimacy must turn into a lifelong trust. It is said that as the man trains the eagle, so does the eagle train the man. A Kazakh proverb says “There are three things a real man should have: a fast horse, a hound and a golden eagle.” The bird becomes a part of the owner’s family and is named according to its appearance and battle characteristics.

Eagle hunting season starts with the first frosts and continues from November through February. This schedule was set because animals have the best fur in winter.

This type of hunting requires special equipment: a coverlet, cap, cushion, leash and a bardak, a special wooden shield for the hand. A shyrga, a stuffed animal made from hare or fox skin and filled with straw, is used for training. The hunter drags the shyrga on the steppe with a long rope and teaches the golden eagle to attack its prey. The training requires immense patience and persistence.