In 2017 the world’s eyes will be on a young nation with a bright future—Kazakhstan. A former Soviet Republic turned engine of economic prosperity, Kazakhstan and its capital city of Astana will host Expo 2017 on the theme of “Future Energy”. This will be the first time that an international exhibition of this kind takes place on the territory of the former Soviet Union. 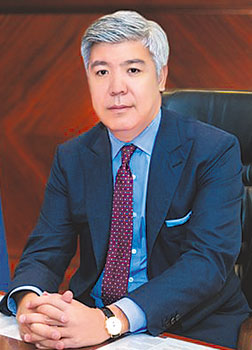 The theme of Expo 2017, “Future Energy”, is well suited to the host country and the region it is leading toward a brighter, cleaner, more prosperous future. Kazakhstan is uniquely positioned to host this exhibition. As a significant oil producer, it is looking to the future and starting the process of greening its economy.

Located in the strategically vital area between Europe and Asia, Kazakhstan has come a long way in the 20 years since it gained independence. When the Soviet Union fell apart, many wondered if Kazakhstan had the long-term viability necessary to establish itself as an independent country. In little more than two decades, it has begun the process of democratization and created a booming economy that has been named one of the world’s 20 Most Attractive Investment Destinations by the World Bank. It is now considered one of the world’s fastest growing economies (along with China and Qatar) and has benefited from over $160 billion in foreign investment since 1991.

As part of the next stage of the modernization process, Kazakhstan has committed to building a green economy and taken the initiative to create the “Green Bridge Partnership”. This partnership, which gained support at the Rio+20 conference on sustainable development in June last year, brings together governments, international organizations, and private businesses to find transnational solutions to sustainable growth. It is also intended to provide a platform to discuss and implement the best available green technologies and best green practices in Central Asia.

And it is on this platform that Expo 2017 will be built. The exhibition is expected to attract five million visits. It will serve to highlight the energy and environmental issues facing Central Asia and, at the same time, attract the world’s best experts on energy efficiency technologies. Its physical structure will reflect the chosen theme. It will be hosted on a self contained site that will be fully self-sufficient in terms of energy. Each building will have solar cells and the site will be powered by its own wind farm. Participants will be able to travel around the site via sustainable transport and dine on organic food.

Because the Expo tradition is built around innovation, Kazakhstan and Astana in particular make ideal hosts for Expo 2017. As a brand new capital city that is leading an economic revolution in Central Asia, Astana’s Expo will allow visitors to experience the possibility of a future world with a cleaner, more secure energy supply. An exhibition on this scale will build international awareness of the energy and environmental challenges that need to be faced in the region. It will also attract some of the best expertise available in the world on subjects such as energy saving technologies and alternative energy solutions, including solar, wind and biomass.

By hosting Expo 2017, Kazakhstan will leave its mark on the international environmental agenda. Hopefully, the impact will be long-term and will help find solutions to some of the pressing energy and environmental needs of the region.

The article first appeared in Diplomatic Courier on March 23.