By Laura Tussupbekova in People on 27 March 2013 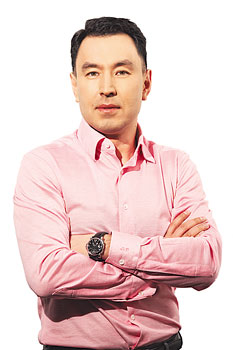 Bisekeyev who is based in St. Petersburg, founded and runs the Arman (Dream) Company. It manufactures equipment for IT systems integration. The company started by supplying such equipment from Germany. Then in 2005, it moved into production as well.

Bisekeyev was a sports star at school and studied at the Kalinin Polytechnic Institute in Leningrad (the former name for St. Petersburg). He dreamed of becoming a design engineer in the auto industry. “I wanted to invent a Soviet Mercedes,” he said.

During the economic crisis that followed the end of the Soviet Union, Bisekeyev became a local businessman. After graduation, he established a company with a partner to provide cell phone services. He helped pioneer the development of GSM cellular communications in the Commonwealth of Independent States and then opened his own unique network of cell phones stores.

“We always financed our business with our own money, unlike other competitors who took loans and at that period were ahead of us in development,” Bisekeyev said in an interview. “But the crisis in 1998 changed everything. Despite the fact that we were making good progress, I decided to continue my studies as I was distinctly aware of my lack of business knowledge.”

In 1999, Bisekeyev graduated from a training course at the Stockholm Business School and decided to launch his own project.

“I had a major resource: the knowledge of how to build a company in accordance with international practice,” he said. “I knew that any business based on the buy/sell principle cannot be innovative, but I wanted to create innovative technologies.”

“We already had a prospering company at that time,” the businessman said. “In addition to mobile communications, we sold advanced technology services (ATS) and equipment for mass market, but nobody was seriously engaged in industrial solutions then. This niche was free and I decided to take it.”

At first, the company only sold imported dispatcher equipment to industrial enterprises that continued to use old Soviet analogue systems. However, oil and gas companies had large investment budgets to modernize their facilities and Bisekeyev decided to focus on them. It proved a successful strategy.

Over the next five years, the Arman Company became a supplier of the largest companies in Russia. Then, Bisekeyev said, he “dared to a mad step” to manufacture Russian digital dispatch communications under the Armtel brand name. He gathered a team of the best programmers from around the world, contractors to make mainframes and manufacturers of communication boards.

“We did not employ the staff for all stages of production, in contrast to our competitors. This gave us more flexibility in dealing with manufacturers, and we were able to concentrate on the quality of products,” Bisekeyev said. “All this took effect, and the reputation and brand image of our company began to grow, as well as the number of our customers.”

The company grew to become a manufacturer and world leader in systems integration. Today, it employs 230 highly trained workers. Their products are in demand around the world. And Bisekeyev does not intend to rest on his laurels. He now hopes to bring his entrepreneurial and high tech expertise home to serve Kazakhstan.

President Nursultan Nazarbayev has tasked the government with finding entrepreneurs to promote Kazakhstan’s innovations at the international level and to create a critical mass of innovators who can introduce the latest technologies and expand production. Bisekeyev believes he has a role to play in this process.

“I was happy to learn Kazakhstan won the bid to host EXPO 2017 and doubly happy about its theme of ‘Future Energy.’ Kazakhstan has the best conditions in the world to develop alternative energy. So we decided to participate in this programme and to build a wind farm in Kazakhstan,” he said. “We have also started manufacturing operations in Kazakhstan.”

“We have established near Almaty a factory to make energy units with new air-cooled generators. Usually, generators used around the world are cooled by oil. And their maintenance costs as much as the generator itself,” he said. “We offer a new business model based on the ‘cost of ownership’ concept. This includes capital costs, expenditures on fuel and consumables, and personnel costs. In our programme, the state will not have to make any contracts for expensive servicing. It will receive effective service and save public money.”

“Kazakhstan invites experienced consultants and they help to make the right policies, but the country’s laws are somewhat behind,” Bisekeyev said. “President Nazarbayev is taking effective action to increase Kazakhstan content in production and to create skilled jobs, which are not followed in Russia and I am impressed by this. Also effective control is necessary over the execution of his initiatives and orders.”

“Kazakhstan has plenty of possibilities,” the businessman said. “I am sure that hard-working, dedicated people will always have the opportunity for self-fulfillment there. We need to learn, gain knowledge and strive to become professional. We need to realize that everything depends on us and we can influence all the processes around us. Nobody will build the future for us.”