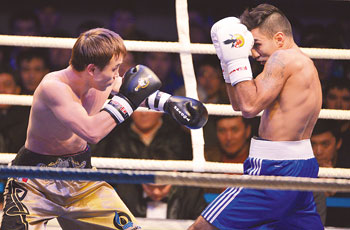 Kazakh boxers Birzhan Zhakypov and Merey Akshalov both won gold medals in the prestigious Chemistry Cup which was held on March 6-9 in the Sports Centre in Halle, Germany.

Zhakypov fought in the light flyweight division (up to 49 kilograms, 107.8 pounds) and defeated LV Bin from China on points by a score of 18-12.

Akshalov won his close contest in the super lightweight class (up to 64 kilograms, 130.8 pounds) against Artem Harutyunyan from Germany by only one point 19-18.

In the semifinals, Rustam Svayev in the middleweight division (up to 75 kg, 165 pounds) lost to Xhek Paskali from Germany 18-14. In the cruiserweight or light-heavyweight division (up to 91 kg, 200 pounds) Anton Pinchuk lost to Emir Ahmatovic, also from Germany, with the score 21-17. Both Kazakhstan boxers, Svayev and Pinchuk, still won bronze medals of the competition.