By Maral Zhantaykyzy in Culture on 27 March 2013

ASTANA – This year marks the 90th anniversary of the birth of the famous Kazakh film director, Sultan-Ahmet Khodzhikov. On March 11, an evening commemorating the memory of this master of Kazakhstan’s cinema was held at the Cinema House in Almaty. Friends, colleagues, family members and filmmakers laid flowers at his memorial plate on the Walk of Fame in front of Kazakhfilm studios. 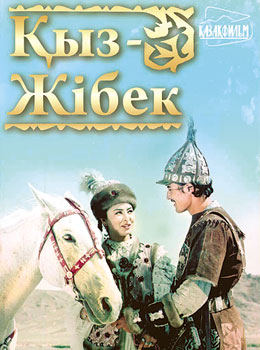 A legend of two lovers “Kyz Zhibek” became the top-grossing film in the history of Kazakhstan’s cinema.

Guests at the event saw the premiere of Bulat Nusimbekov’s new documentary “War and Peace of Sultan Khodzhikov.” The film focuses on the life and work of the great director and the creation of his great drama, “Kyz Zhibek” (“Silk Girl” in Kazakh).

During World War II, the eighteen year-old Sultan-Akhmet Khodzhikov went to the front and fought in the famous Eighth Panfilov Guards Division. He returned from the war as a Commander of the Guard and was awarded several military honours, including the Order of the Red Star.

On the advice of his older brother Kulakhmet, who worked in cinema, Khodzhikov went to the directorial faculty of the Gerasimov Institute of Cinematography. Together, Khodzhikov and Leningrad director Pavel Bogolyubov made the film “Girl-zhigit” (Girl-Brave in Kazakh). The film “Mother and Son” was Khodzhikov’s first independent work, written from his own script.

The short film about pioneers of the Virgin Lands programme problematises the important issue of the education of young generations and praises the romanticism of the work of Soviet youth. The film “We are From Seven Rivers” depicts Kazakh participation in the Great October Revolution. The Kazakh legend of the tragic fate of the beauty Aisulu formed the basis for Khodzhikov’s film “Chinar on the Rock.”

The director always actively sought to reflect the past and the present of the Kazakh people on screen. He plumbed the national epic, the pearl of Kazakh folklore, and based his most important film, “Kyz Zhibek,” on the story by Gabit Musrepov. This legend of two lovers he and his brothers had heard from their grandmother when they were children. The brother who encouraged Khodzhikov to get into film and who went on to become the first Kazakh film designer, Kulakhmet Khodzhikov, had wanted to produce a movie based on this legend, and for many years had collected works of Kazakh folklore and did graphic illustrations of them.

This film, which instantly made Khodzhikov famous all over Kazakhstan, the Soviet Union and beyond, is still the hallmark of Kazakhstani cinema. Making the film was a long and difficult job. The director fought off Soviet censorship, which was trying to distort historical truth and demanded serious revisions. Sultan-Akmet Khodzhikov suffered a heart attack during filmmaking but still managed to defend his ideas. The director himself selected the actors and approved the casting of the young unknown Meruert Utekeshevа for the lead role, Kyz Zhibek. The final film had strong characters, vivid emotions and exciting dramatic collisions. The film memorably embodies the Kazakh Romeo and Juliet, but also shows the synergy of the team as a whole: the beautiful costumes of production designer Gulfayrus Ismailova, the beautiful nature cinematography, the moving music of the classicist of Kazakh culture, Nurgisa Tlendiev; all of these contributed to the film’s stunning success.

“Kyz Zhibek” became the top-grossing film in the history of Kazakhstan’s cinema, and is still one of the nation’s favourites. The DVD sits in many a young person’s personal film collection.“Kyz Zhibek” won three awards at the Fifth All Soviet-Union Film Festival in Tbilisi: a special diploma for a vivid imaginative rendering of a historical theme for production director Sultan Khodzhikov; a diploma for contributions to the dramatic arts by an actor for Kenenbay Kozhabekov and a diploma and cash prize for the best artwork for artist director Gulfayrus Ismailova.

At the film’s first preview at the Belgian Art Research Institute, world-renowned man of art and Belgian painter Roger Somville said, “Today’s films bear from the screen a cruelty, but I’ve now seen a picture made with respect for people. All others should learn this from the Kazakhs. What a fresh breeze is blowing from the East!”

“Cinema is an art. The people must understand it. “Kyz Zhibek” is not only a Kazakh film; it touched our feelings,” the French viewer said.

“It could be said that such reels are born once in a hundred years!” President of Kazakhfilm Yermek Amanshaev said in his opening speech at the commemoration evening.

In 1972, Sultan-Ahmet Khodzhikov was awarded the State Prize of the Kazakh Soviet Socialistic Republic for the film “Kyz Zhibek.” Nevertheless, after “Kyz Zhibek,” Sultan-Ahmet Khodzhikov was not able to produce any more pictures for the public. He wrote many scripts that were always rejected by Kazakhfilm’s art council. He wanted to make a documentary film about World War II and his brothers-soldiers. He also did not have time to complete his trilogy about Kazakh wrestler Qajimuqan Munaytpasuly.