By Altynai Sultan in International on 27 March 2013

ASTANA – Iran and the P5+1 powers are preparing to hold the next round of their negotiations on Tehran’s nuclear programme in Almaty, which already hosted their talks in February. 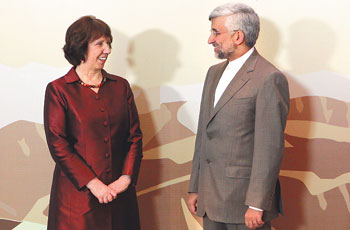 Catherine Ashton and Saeed Jalili agreed to meet again for the next round of talks in Almaty on April 5-6.

The latest round of P5+1 talks on Iran’s nuclear programme at the expert level was held in Istanbul on March 17-18. The P5+1 (also known as the EU3+3) presented to the Iranian side a more detailed version of the proposals they presented at the Almaty talks on February 26-27.

Experts from the P5+1 group of China, France, Germany, Russia, the United Kingdom and the United States provided additional information on Iran’s revised proposals for confidence building. The two sides also discussed a number of technical issues. The Istanbul talks prepared the way for further rounds of talks

The negotiations follow Iran’s refusal to end its uranium enrichment programme as required by the UN Security Council.

The P+1 countries and Iran all agreed to have Kazakhstan host the April talks in Almaty as well as the February ones.

Kazakhstan has played an active and leading role in non-proliferation issues and was one of the first countries to unilaterally and totally renounce nuclear weapons when it gave up the fourth largest nuclear arsenal in the world in the early 1990’s. President Nursultan Nazarbayev took another historic step towards nuclear disarmament when he issued a decree to close the Semipalatinsk nuclear test site on Aug. 29, 1991 in Almaty.

Participants in the Almaty talks did not reveal any details about the negotiations but said they had made positive progress.

“We collectively have developed a number of constructive suggestions for Iran. Today, we have voiced our concern to the Iranian side, which, in turn, should study and analyse our proposed measures and provide an answer at the next meeting in Almaty,” EU High Representative for Foreign Affairs and Security Policy Catherine Ashton said at that time.

Saeed Jalili, secretary of Iran’s Supreme Security Council and head of the Iranian delegation at the Almaty talks acknowledged the positive results of the February talks.

Jalili and Ashton thanked Kazakhstan for agreeing to host the April round of talks.

Almaty is the main scientific, cultural, financial and industrial centre in Kazakhstan and the largest city in the country.