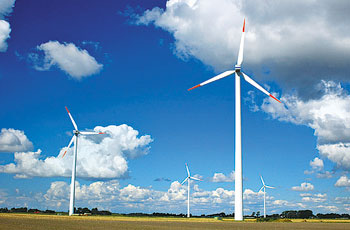 PAVLODAR – The production team of the Television and Radio Complex of the President of Kazakhstan and Pavlodar National Company have started to shoot a documentary film under the working title “Green Energy” in the Pavlodar region, which is the leader in the use of alternative energy in Kazakhstan.

The film features scientists from Sultanmakhmut Toraigyrov Pavlodar State University who are involved in scientific research. They established the Centre for Energy Supply, which includes four wind generator setups and 10 solar panels. The electricity generated is used for lighting a student philharmonic and concert hall and in the work of a water sterilisation device created by specialists at the university. Among the researchers’ plans is the creation of a dam-less hydroelectric power plant on the Irtysh River. The university scientists will present their developments in the field of green energy at the international exhibition EXPO 2017.Journalists were interested in innovative projects carried out with the participation of Pavlodar National Company, its future plans and prospects for alternative energy projects, in particular the construction of wind turbines in a rural area of Ekibastuz city on the border with the Akmola region.

A preliminary agreement has been reached regarding the trip to China of a joint crew of the Television and Radio Complex and Pavlodar National Company to continue shooting the film at JSC TBEA, the largest solar energy research base in China and one of the partners of the Pavlodar scientists in the development of alternative energy in the region.