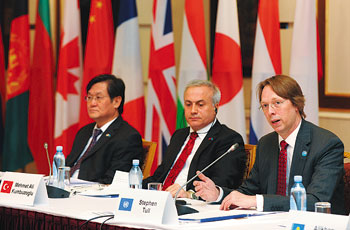 UNDP Permament Representative Stephen Tull (r) believes in civil service reform to be the engine of changes in society.

On March 15, Alikhan Baimenov, the chairman of the Agency for Civil Service Affairs (ACSA) and John Berry, the director of the U.S. Office of Personnel Management (OPM) signed a Memorandum of Cooperation in Astana. The two agencies agreed to exchange information and expand cooperation.

“Kazakhstan intends to create all conditions necessary for the effective operation and development of its civil service regional centres,” President Nursultan Nazarbayev said in a message to the meeting, which was held at the Rixos Hotel in Astana and attended by U.S. Ambassador to Kazakhstan Kenneth Fairfax. “Kazakhstan is interested in actively studying the best international practice and is ready to share its own civil service experience.”

UN Development Programme Permanent Representative Stephen Tull told the meeting, “Civil service reform is the engine of changes in society. The measures that we are discussing imply a constant search to improve civil services by citizens and society. The reform of public administration can be an engine for critical changes.”

“The idea of creating a regional hub is very important, since we are exchanging experiences between countries on a global scale. This exchange is the ability to increase efficiency and maintain reforms in the civil service,” Tull said. “I also believe that this is an important area of intergovernmental cooperation to ensure peace. The regional hub will serve as an inter-institutional network for the continuous improvement of public service. This is an opportunity to improve the capacity of civil service agencies and ensure effectiveness for the public.”

The regional hub will create an institutional framework to exchange experience between the civil services of the countries of the Commonwealth of Independent States (CIS) and Central Asia.

Previously, Bauyrzhan Baibek, former deputy head of the Presidential Administration, discussed the impact of civil service reform on the work of local and regional governments at the second international conference “Assessing the Effectiveness of the Government.”

“Today, lots of money is allocated to the regions, but analysis shows that regional mayors do not have all the powers and resources they need. Now, we have the political consent, the transfer of powers from the centre to the regions, from regions to districts can be carried out successfully and the issue of local self-governance will be solved,” he said.

“What will be done here? Ministers and their deputies are the people who will be engaged in industrial policies, improving legislation, and creating favourable conditions (of government). Executive secretaries will ensure that the system runs smoothly, that all government workers enjoy stable conditions and that all orders of the president are effectively carried out,” Baibek, who has since moved to become the first deputy chair of the ruling Nur Otan party, said.

Regional governors and their administrations will provide stability work to solve regular problems. If the local mayor or governor cannot tackle an issue, he will ask the government, and they will make the appropriate changes in the law and form appropriate new policies.

Governors and mayors will have all the powers necessary to address the problems quickly. The efficiency of the use of financial resources, the performance of the state structure will improve, the conference was told.

“Currently, 10 percent of government workers are based in the provinces. That means the state bureaucracy has 2,500 rural governors and mayors and 11,000 government workers who work in the countryside who really know the problems they deal with in local communities at first hand and know the problems inside the villages. Our task today is to gradually provide them with specific powers, for they could solve most problems on the ground,” Baibek said.

The previous effort at civil service reform in the 1990s failed because the principle of smooth transition from the old system to the new one was violated. Frequent rearrangements and staff reshuffle breached the principle of taking responsibility for the consequences of decisions.

The disruptions caused by that failed effort at reform cost the civil service dearly. More than half the top managers including many of the most experienced and skilled ones left government service to work in the private sector. Government workers suffered from managers who were inexperienced and lacked perspective, a poor system of selection and staff deployment and from low salaries. Experts said the experience of developed countries pointed to the need to recruit more professionally trained managers to government service.

However, the experience of other countries shows that the creation of a rational system of state administration capable of meeting the challenges of a free market society and employing efficient methods of management is a long and complicated process. The new reform programme recognises the need to start this process by implementing a number of priority measures.

The conference was attended by representatives from more than 30 countries, the Organization for Economic Cooperation and Development (OECD), the World Bank (WB), the Organisation for Security and Cooperation in Europe (OSCE), and the U.S. Agency for International Development (USAID).