ASTANA – Kazakhstan’s economy is projected to grow by a robust 6 percent this year, the government and the National Bank announced March 13.

In a statement, the government said its economic policy this year would focus on modernization through diversification and social programmes. It would follow a policy of seeking full employment, well-balanced regional development, making government administration more effective and fostering increased economic integration with neighbouring nations and with the global economy.

The main engine driving economic growth will be investments into the non-energy sectors, the statement said. The government will work to maintain a favourable investment climate and increase oil revenues in the National Fund. 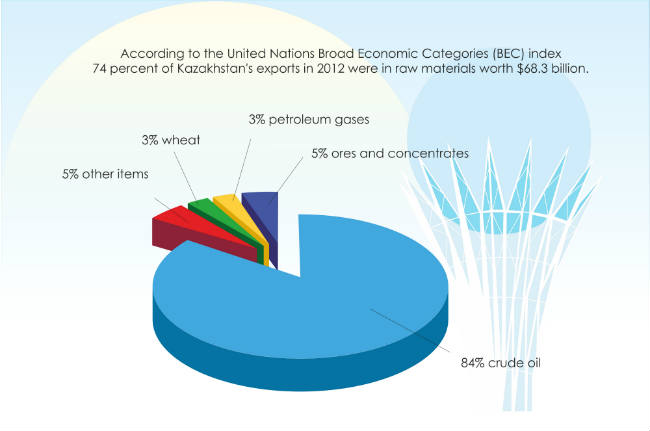 A new fiscal policy will be drafted. The government and the National Bank plan to keep inflation within the margins of 6 to 8 percent. A balanced budget will be drawn up to improve the stability of public finances, anticipating a possible fall in global commodity prices this autumn.

The government is also introducing, as planned, a Single Pension Savings Fund to increase fiscal stability and increase the savings of individuals.

The government will continue to implement the major industrial projects it planned in the 2010-14 State Programme for Accelerated Industrial-Innovative Development (PAIID).

The government will also continue to finance major road and rail projects and work to set up more joint ventures in industry with international investors. Major modernisation programmes will continue in agriculture within the 2020 State Programme for Agro-Industrial Development.

A long-term strategy to transition to a sustainable green economy is being developed to ensure sustainable growth based on the rational use of natural resources. It will include a new system to manage national resources management, reduce the use of energy and increase energy efficiency while developing new renewable energy sources and reducing pollution.

The process of issuing business permits will be revised and streamlined. All permits that are not concerned with safety issues will be abolished and replaced by notifications. 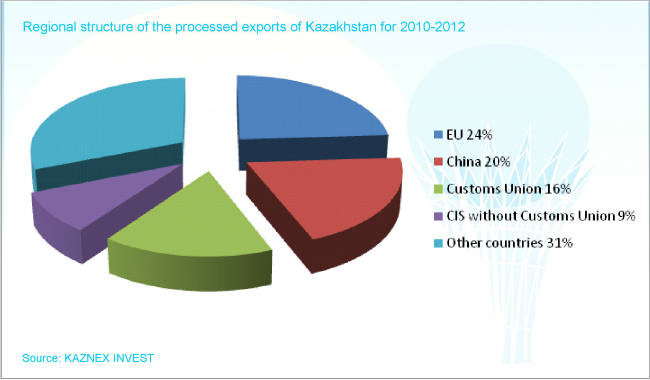 Remaining trade barriers and tariffs will be removed to boost trade and complete the process of integration into the Single Economic Space and the Customs Union.

This year, the government hopes to complete work on the legal framework of the Single Economic Space and the Customs Union.

The statement said the government’s economic policies in 2012 had preserved positive trends in growth and social stability despite some negative trends around the world.

Kazakhstan’s gross domestic product (GDP) grew by 5 percent last year and industrial production increased by 0.5 percent. Service industries grew by 10 percent in 2012 while inflation remained at only 6 percent, a fall of 1.4 percent compared to 2011.

The banking sector continued its steady recovery last year. Total bank assets increased by 8.2 percent, the total volume of loans grew by 13 percent, deposits increased by 7.2 percent compared with the figures for 2011.

The national budget deficit in 2012 came to 906.5 billion tenge ($6 billion) or 3 percent of GDP and the volume of foreign trade grew by 9.8 percent. The current account trade surplus came to $8.8 billion. 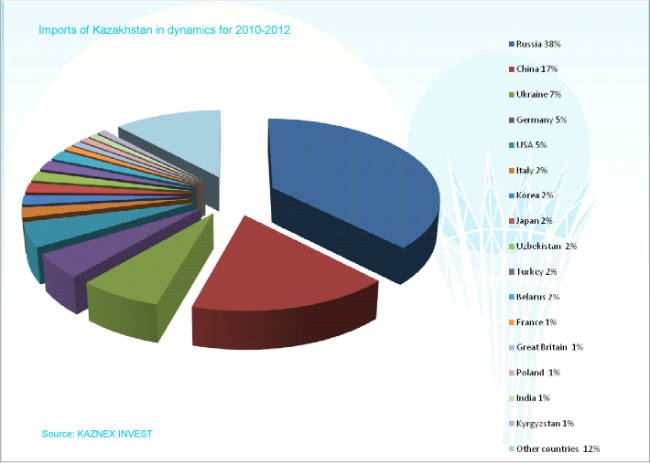 The Fitch international rating agency increased the sovereign credit rating of Kazakhstan to BBB+ in 2012.

However, government experts warned that problems in the global economy could still negatively impact Kazakhstan.

The global economy has slowed down again following its recovery from the 2008-9 financial crisis. Lower global growth is expected to remain widespread till 2020. The International Monetary Fund forecasts 3.5 percent global economic growth this year, slightly higher than the 3.2 percent rate in 2012.

The Fitch agency cut its growth forecast for the world economy in 2013 to 2.4 percent from its previous estimate of 2.6 percent. However, the negative impact of global trends is expected to be less in Kazakhstan compared to 2012.

Well-timed market reforms and growing foreign trade, and investment are the main forces generating continued economic growth in Kazakhstan. In some listings, the country ranked third among the 25 most dynamic economies last year behind only China and Qatar.

Kazakhstan rose in the World Bank’s Doing Business 2012 Index from No. 58 in 2011 to No. 47 out of 183 countries listed. It had the most favourable rating of any of the 12 nations in the Commonwealth of Independent States. 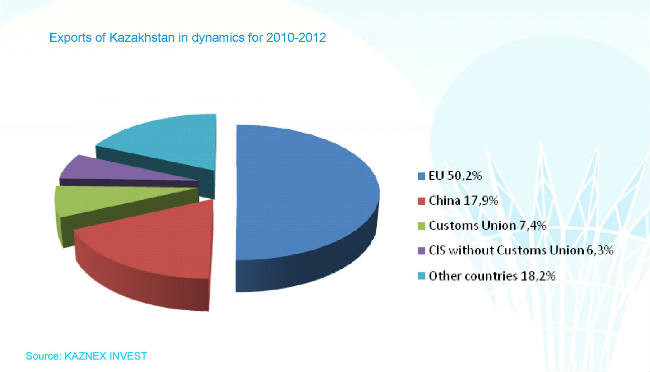 The World Bank also put Kazakhstan among the top 20 most attractive countries in the world for investment. Since independence, foreign direct investment (FDI) in Kazakhstan totaled $170 billion. In 2012, the country invested $18 billion in its own foreign investments. Kazakhstan’s business-friendly economy offers access to the nation’s natural resources. The country’s political and economic stability, continued growth and strategic location are also attractive to foreign investors. The country’s exports are still dominated by oil, natural gas, uranium, metals and precious minerals.

According to the National Agency for Export and Investment KAZNEX INVEST at the Ministry of Industry and New Technologies, foreign trade totaled $135.5 billion in 2012, a 7.5 percent increase compared to 2011. Exports increased by 5.2 percent to $92.7 billion while imports increased by 12.6 percent to $42.8 billion. The country’s foreign trade surplus for 2012 is expected to remain around $50 billion, the same figure as in 2011.

The United Nations Broad Economic Categories (BEC) index said 74 percent of Kazakhstan’s exports in 2012 were in raw materials worth $68.3 billion. Some 84 percent of these were crude oil, 5 percent were ores and concentrates, 3 percent were petroleum gases, 3 percent were wheat and the remaining 5 percent was other items. Processed goods amounted to 26 percent of exports worth $24.4 billion, a 10 percent increase on 2011.

The balance of trade reflected the growing diversification of the domestic economy.. The proportion of trade with the countries traditional partners – the CIS and Baltic nations – remained high. The main trade partner of Kazakhstan is Russia. Trade continues to grow with other nations, especially China, Turkey, Belarus, Germany, Switzerland, the Czech Republic, Italy, the United States, Britain and South Korea.

In July 2010, the Customs Union of Belarus, Kazakhstan and Russia was launched. Government experts have projected that it will increase the combined GDP of its mmber states by 19 percent by 2015.