ASTANA – A unique forum, “My Destiny is My Country’s Destiny,” kicked off its nationwide tour on Feb. 14 in Yereimentau and Feb. 18 in Korgalzhyno districts in the Akmola oblast. On Feb. 27, the forum took place in the Issatai district of the Atyrau oblast. And on March 1, other forums in Taldykorgan city, the town of Tekeli, and Karabulak village of Yeskeldy district in the Almaty region took place. Soon, district forums will start taking place in all other oblasts across the country, as well as in Astana and Almaty cities. 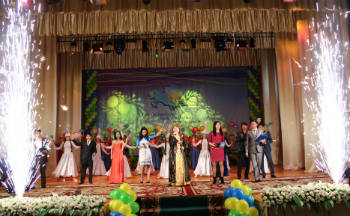 The forum is designed to show the success Kazakhstan has achieved in its years of independence through the prism of the changing lives of the nation’s people. The forum was originally launched in July 2012 by the Nazarbayev Center and attracted wide attention, after which it was decided to hold forums annually in all regions of the country.

These included Deputy Mayor of Yereimentau District Serik Kushkunbayev, Honoured Architect of Kazakhstan and honorary citizen of Korgalzhyn Serik Rustambekov, as well as members of the board of veterans and others.

“They say that politicians and great people write history, those who have special qualities, like a strategic vision of any situation and ideal ways to address it, a sharp analytical mind and phenomenal memory, unbending will and faith in the justice of their choice… The past 20 years have convincingly proven that Nursultan Nazarbayev has all these qualities,” Kushkumbayev said in his welcoming speech on Feb. 14. Serik Kushkunbayev was born in Yereimentau District and devoted his life to the development of his native land. He is an economist-organizer of agricultural industry by education and is one of contributors to the development of Yereimentau.

Serik Rustambekov, honored Master of Fine Arts of the Republic of Kazakhstan and honorary citizen of the district, said on Feb. 18, “I am delighted to be helpful to the country, I am proud that I have worked with worthy people, real patriots… Our country gives every citizen of Kazakhstan the opportunity to realize their dreams, to use their powers, to believe in themselves and to become an independent person.” 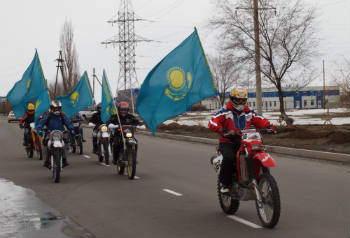 In Tekeli (Almaty region) the start of the Forum was marked with motorcycle rally.

Today, Serik Rustambekov is an owner of numerous awards and titles in professional activities, and perhaps one of the most significant awards for him is the title “Honorary Citizen of Korgalzhyn District”. More than four decades ago, a curious boy had no idea what his life would be, but later he became an acclaimed architect contributing to many projects in Astana.

Forum participants noted in their remarks that conditions for self-realisation and the improvement of the lives of youth had been created in the Akmola region. The number of labour youth student groups in 2012 rose to 112 and about 3,000 young people have made socially useful contributions to the development of the region under the auspices of the Zhassyl Yel national youth initiative. Civil society institutions were represented by 62 youth organisations in the region. At the forums, the most active residents of the districts received diplomas and letters of appreciation for their active participation in the social life of Yereimentau and Korgalzhyn.

In Korgalzhyn, Irina Deyeva, head of the “Russian Song” ensemble and a blind poet-performer, said, “I am Russian. I was born, grew up, and made myself in Korgalzhyn, on this blessed land, which I consider my home. My poems and songs are heard here, I feel happy. I am sure that our children and grandchildren will have a bright future.”

“My fate is directly tied to the fate of the country. I witnessed formation of the young state,” machine operator Alexey Rush, also of Korgalzhyn, said. “I would like to appeal to the young people of Kazakhstan: Strive forward! The country’s future is your future.”

Rush, an ethnic Russian who spoke in perfect Kazakh, had earlier been recognized with the Order of “Kurmet” (Honour) and had been a delegate of the 17th annual session of the Assembly of the People of Kazakhstan in 2012 called “20 years of peace, accord and creation’. 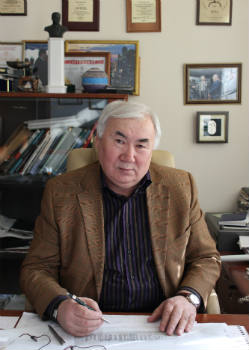 Participant of the Forum Serik Rustambekov is an owner of numerous awards, one of which is the title of “Honorary Citizen of Korgalzhyn District.”

A labour veteran, Tatyana Krivoruchko, chair of “Prosvita Zhetysu” Regional Ukrainian Ethno-Cultural Center named after Taras Shevchenko, is a member of the Assembly of the People of Kazakhstan. She was born and grew up in Karabulak village of the Yeskeldy district in the Almaty oblast.

Since 1971, she has been working in education, including 24 years as principal of the high school named after Shestakov. In 2003, the Ukrainian Ethno-Cultural Center was established under this school. In 2005, this center became a part of the regional Ukrainian Ethno-Cultural Center. Tatyana Krivoruchko was awarded with honorary certificates of the mayor of the district, the district education office, a certificate of the Minister of Education of the Kazakh SSR. In her remarks at the district forum on March 1, she said, “Kazakhstan, over the years of independence, has not only created and enhanced its nationhood. Kazakhstan has also demonstrated to the world its own model of development, attracting interested glances of politicians from other states.”

According to Kanat Saudabayev, director of the Nazarbayev Center, “Kazakhstan, over the short period of its independence, has transformed from an unknown former Soviet Republic into an economically strong, democratically developed and respected country due to the strategic vision and actions of its first president, Nursultan Nazarbayev. These impressive achievements were made possible by the contributions of the citizens of Kazakhstan, on whose creative potential the president always relied.”

On March 1, the district forums in Almaty region took place in Tekeli and in Yeskeldi.

In Tekeli, the event began with the planting of pines and firs in the center of the city. After, participants accompanied by motorcyclists waving national flags headed to the local Palace of Culture, where in the lobby of the building the exhibition “My city is my happiness” was organized. Start to the official part was given by Kanybek Aitzhanov, the mayor of the city, who congratulated participants, organizers and guests of the forum with the outstanding event.

Meanwhile on the same day, in Yeskeldi district the audience met participants of the forum amid which were the chairman of the district council of veterans Bimurat Boranbayev, editor of the regional newspaper “Zhetysu shygilasy”, holder of the title “Madeniet kairatkeri” (Cultural worker in Kazakh) Sabit Bibolov, teacher of the secondary school named after Shestakov, Tatyana Krivoruchko, Mayor of Aldabergen disctrict Tolegen Musaripov, businessman Herman Nam, the primary care physician at the Yeskeldi Central Hospital Elmira Beisembaeva, head of the “Telman” farm Aben Taizhanov, and teacher of the school named after Shestakov Bakyt Tusupova.

Regional forums will highlight residents whose life stories are the most striking examples of the unity of the country’s fate and the fate of its citizens, who continue to make valuable contributions to the ongoing development of independent Kazakhstan.

Delegates and speakers at the forums are the real everyday life heroes of our times: prominent public and political figures; representatives of state bodies, arts and sciences, ethno-cultural associations and various sectors of the economy; war and labour veterans; soldiers; famous athletes and youth leaders.

Regional forums are to be held in two stages: first at the district level, then at the level of the oblasts and the cities of Astana and Almaty. The best participants will be delegated to Astana for participation in the national forum, which will be held as part of the celebrations of the Day of the Capital in July 2013.