By Assem Kazybay in International on 13 March 2013 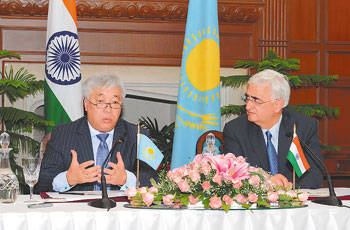 The visit of Erlan Idrissov to India contributed to the development of cooperation between the two states.

During the visit, Idrissov held talks with Vice President and Chairman of the Upper House of the Indian Parliament (Rajya Sabha) Mohammad Ansari and Indian Foreign Minister Salman Khurshid.

The foreign ministers of the two countries exchanged views on topical international issues, current bilateral cooperation and prospects for the future and reviewed the implementation of agreements achieved at the highest level during the visits of President Nursultan Nazarbayev to New Delhi in January 2009 and Prime Minister Manmohan Singh to Astana in April 2011.

Idrissov noted that “since the establishment of diplomatic relations, Kazakhstan and India have come a long way, laying a solid foundation for mutually beneficial cooperation.”

The sides appraised dynamically developing bilateral cooperation and confirmed their commitment to strengthening constructive dialogue on global and regional security, the rehabilitation of Afghanistan and multilateral cooperation, including interaction within the framework of the U.N., the Conference on Interaction and Confidence-Building Measures in Asia (CICA) and the Shanghai Cooperation Organisation.

Issues regarding developing cooperation in the oil and gas sector, the pharmaceutical industry and transport infrastructure were discussed during meetings with Minister of Petroleum and Natural Gas of India Veerappa Moily and heads of India’s largest companies. The Indian company ONGC Videsh Limited has already acquired a 25% stake in the Satpayev Oil Block in the Caspian Sea, and India is keen to expand cooperation in the oil and gas sectors.

A round-table meeting with representatives of the business and scientific communities on “Prospects for Kazakh-Indian cooperation” has aroused intense interest.

Speaking at the meeting, Idrissov noted that the main goal of the new political course of Kazakhstan outlined by the president in the development strategy Kazakhstan 2050 is to join the top developed world countries.

The foreign minister called on Indian businesspersons to use in full the potential of bilateral cooperation, the favourable investment climate of the republic and the new opportunities provided by the Customs Union for establishing joint high-tech productions.

During a meeting with political commentators of Indian media, Idrissov answered questions about prospects for regional and bilateral cooperation, Kazakhstan’s current development and the outcome of the recent talks in Almaty on the Iranian nuclear programme.

Kazakhstan is one of India’s largest trade and investment partners in Central Asia. Trade between Kazakhstan and India made 525 million dollars in 2012. Exports reached 190 million; imports 335 million.

The visit has promoted the further consolidation of strategic relations between Kazakhstan and India and defined priority areas for further cooperation.

These regular meetings, held at all levels, demonstrate the dynamic development of bilateral cooperation between the two nations. The Declaration on Strategic Partnership between the two countries was adopted during the successful and productive state visit of President Nazarbayev to India in 2009.