By Malika Rustem in International on 27 March 2013 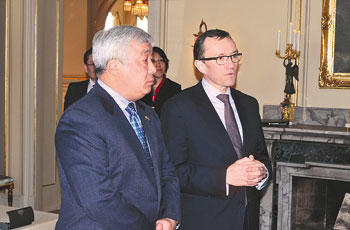 Erlan Idrissov (l) and his Norwegian colleague Espen Barth Eide discussed a wide range of bilateral and international topics during their meeting in Oslo on March 22.

ASTANA – Kazakhstan’s Foreign Minister Erlan Idrissov last week wound up his tour of northern Europe in Oslo after sharing Kazakhstan’s plan for a green economy with the region. The key message from Kazakhstan’s delegation to Finland, Norway and Sweden, arising from President Nazarbayev’s programme of intensive economisation of foreign policy, was the same: Kazakhstan hopes to attract more green technology to complement the development of its green economy and the forthcoming EXPO 2017.

In Oslo, Idrissov first met with Norwegian Minister of Petroleum and Energy Ola Borten Moe. They discussed cooperation in traditional spheres, including oil and gas, as well as renewable energy sources such as biofuel and hydropower. (Norway produces 97 percent of its electric power using water resources.) The heads of the two ministries agreed on further cooperation in order to attract Norway’s expertise and technologies to the ongoing development of the environmentally friendly and innovative energy sector in Kazakhstan.Minister Idrissov next met Marit Nybakk, vice president of the Storting, Norway’s Parliament, to discuss inter-parliamentary interaction, nuclear non-proliferation, regional cooperation and other issues. Nybakk positively emphasised the intensive exchange of delegations of various levels between Kazakhstan and Norway and expressed hope for the further development of the bilateral relationship.

At his meeting with Norwegian Foreign Affairs Minister Espen Barth Eide, Idrissov discussed a wide range of bilateral and international issues, including enhancing bilateral trade turnover, talks related to Iran’s nuclear programme, aid to Afghanistan and cooperation within Central Asia. Eide applauded the forthcoming opening of the full-fledged Embassy of the Republic of Kazakhstan to the Kingdom of Norway this year. During the visit, Foreign Minister Idrissov delivered a speech at the Norwegian Institute of International Affairs about development and strengthening bilateral relations. The Foreign Minister was also interviewed by The Dagens Næringsliv daily newspaper and Norway’s national television channel.