ASTANA – Last year, the capital of Kazakhstan was chosen as the venue for international exhibition EXPO 2017, to be held in 2017. The General Assembly of the International Exhibitions Bureau (BIE) picked Astana over the Belgian city of Liege by 103 votes to 44. For the first time in the history of world industrial expositions going back to in 1851, Kazakhstan became the first developing country to host one. 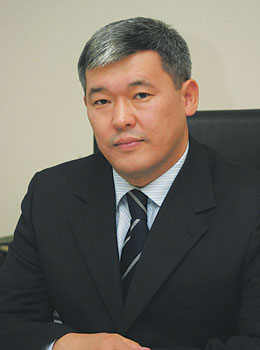 EXPO Commissioner Rapil Zhoshybayev told KAZINFORM about the importance of the exhibition for Kazakhstan and plans to prepare for the event.

You were the national coordinator to promote Kazakhstan’s bid to host the EXPO in Astana. How did you do it?

Let us recall what President Nursultan Nazarbayev said after the results of voting had become known: “The victory of Astana in this intense competition is far from accidental. First, it is the recognition of the capital as (a global) centre and that it is worthy of its world ranking. Certainly, the economic success of our state played a role in the choice of Astana. Finally, it is important that Kazakhstan offered a very topical theme for the exhibition – “Future Energy.” So, as the president said, “The choice of Astana was the fruit of the efforts of all the people of Kazakhstan.”

By itself, the exhibition theme “Future Energy” reflects the most actual problem of the rational use of energy resources by humanity, and its solution is a strategic priority for many countries. The EXPO will also address underlying themes on a global scale, such as the lack of access to electricity and the reduction of poverty. The world needs new ways of development – it needs a green economy and green development. Kazakhstan, despite its rich resources of raw materials for energy production, shares common interests and aspirations with other countries. The risks of depleting traditional energy resources are great, and the consequences of their use are harmful to the environment. This is why Kazakhstan decided to use the EXPO to raise international awareness on these issues.

Why is this event important for Kazakhstan?

You know, there’s a saying, “To see people and to show off.” It is just about the exhibition. First, the exhibition demonstrates the latest records of achievements in science and technology, and second, it is also is a way of looking ahead. Our experts even believe that some Kazakhstan exhibits will belong to the day after tomorrow.

Incredible as it may seem, the show is not as costly as it seems at first glance, and with good planning, it will have a positive economic effect. First, the winning country attracts significant investment into the economy of the city that hosts the event, with large foreign investors participating in the project. Second, new infrastructure will be constructed for Astana and tens of thousands of jobs will be created to build the exhibition facilities and maintain them. Third, a powerful incentive for the inflow of foreign tourists is created for the whole country. Now, we will have a large-scale project to carry out in accordance with the terms, guidelines and regulations supplied by the International Exhibitions Bureau.

Is it your role as commissioner to monitor compliance with these regulations?

We have provided a guarantee to ensure conditions for the life and work of the exhibitors covering tax regulation, the provision of assistance to developing countries and other matters. We will take all the necessary measures to supply the necessary visas and to issue permits for the activities of construction workers and engineers, the exhibitors and covering customs and taxation issues.

Why is there is a need to appoint a commissioner to help organise and oversee exhibition?

A: The history of the EXPO movement began in London, where the first international exhibition was held in 1851. Over time, the number of exhibitions has increased, and it became obvious that it was necessary to take some measures to establish control over them. In 1928, in Paris a convention on international exhibitions was signed which established the International Exhibitions Bureau (BIE) and it set up simple rules that govern the approval, creation and specifications on holding them. To ensure that these rules are respected, there is a need to appoint an authorized representative of the host country. Thus, the procedure for appointing commissioners is common practice and they have repeatedly proven their worth at previous exhibitions.

What functions does the commissioner have to fulfill?

As a commissioner, I met with the Secretary General of the International Exhibitions Bureau Vicente Loscertales. He called the victory of Astana a triumph, because in the 20 years of his leadership he has not seen any city win by such a wide margin. During his January visit to Kazakhstan, Mr. Loscertales became convinced that the process of preparation had started well. He assured us the BIE will support us in our negotiations with participating nations. He told us it was of particular importance for the president and government of the host country to express personal support for the event.

I have also held informative meetings with tourism industry officials from Britain and Austria. Similar meetings are planned with officials from other countries. We are interested in the experience of these countries as highly developed tourist destinations and as potential partner to help us implement our own Kazakhstan projects.

As commissioner, I have also continued the work I started as national coordinator to promote Kazakhstan’s application. These are, first, ensuring the implementation of the agreements reached while lining up support for our bid. We established diplomatic relations with several countries in the Asia-Pacific region, Africa, the Caribbean and South America. With many countries, we have agreed to establish and develop cooperation in the economic, cultural, and educational sectors. Secondly, I am responsible for coordinating the programme of assistance to developing countries. One of the main principles of the international exhibition movement is to ensure equal and fair participation of countries willing to participate in EXPO. The host country should, therefore, create the conditions for developing countries, as their participation will add diversity and enrich the content of the exhibition.

Part of my job is providing presentations on the progress of preparing EXPO exhibits to the BIE General Assembly. Between the General Assemblies, I will be participating in regular working meetings and negotiations to prepare for EXPO 2017, and for other of current and future exhibitions. This is a good opportunity to gain experience in the conduct of such complex events. For example, currently we are working on the organization of the Kazakhstan Pavilion at the World Expo in Milan in 2015. But most importantly, we will continue to work with countries to attract them to EXPO 2017 and to achieve the maximum possible number of international participants. With each country, we will sign individual agreements on participation in EXPO 2017 in Astana. In addition, within the framework of his competence, the Commissioner is involved in the consolidation of Kazakhstan’s initiatives related to the topic of the exhibition, as well as their integrated promotion in international markets.

Is Kazakhstan ready to host the EXPO?

A: President Nazarbayev has said the BIE’s decision places great responsibility upon us, because it involves trust and the hope that EXPO 2017 will truly be a unique phenomenon in the international exhibition movement. The exhibition will impact upon large and key sectors of the economy and on industry, tourism, small and medium businesses, the hotel and service industry and the creation of new jobs.

The first requirement for any city applying to host an EXPO is to have the full support of its national government too. There any EXPO project should be a national project supported by the government, regional and local authorities.

That was why our government created the State Commission and the Organising Committee for EXPO and why it has drafted and approved a five year national plan from 2013 to 2018 to organise the event. Working teams have been formed in state agencies and domestic businesses will participate in the work.

President Nazarbayev has said, “It is important to turn EXPO 2017 into the centre of transition into the Third Industrial Revolution, which includes the alternative economy, the creation of appropriate high-tech materials, renewable energy and relevant training programmes.” Based on this, the EXPO area will be constructed with green economy and smart power buildings served with renewable energy to match the theme of the exhibition. The construction of such a unique, high-tech project is a good opportunity to make a great leap in technological development.

After the show, we will get a new district of the capital with modern buildings and infrastructure, and facilities for the implementation of innovative ideas. It is important that qualitatively new technology and innovations will enter the life of the whole country.

The interview first appeared in KAZINFORM news agency on March 11.

The author is Kazakhstan’s EXPO 2017 Commissioner.