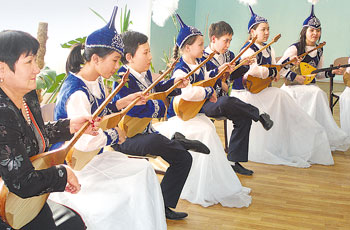 Students of school No. 48 played Kazakh national instruments for the guests.

ASTANA – To celebrate the 20th anniversary of the establishment of diplomatic relations between Kazakhstan and the European Union, the EU Delegation to Kazakhstan and the embassies of EU member states are organising a series of political, cultural and educational events.

On Feb. 19, European diplomats visited 28 schools in Astana to educate their students about the 27-nation EU under what is known as European Union Hour initiative.

Ambassadors Aurelia Bouchez of the EU, Jaan Hein of Estonia, Efthymios Pantzopoulos of Greece, Manuel Larrotcha Parada of Spain, Jean-Charles Berthonnet of France, Juris Maklakovs of Latvia, Rokas Bernotas of Lithuania, Imre Laszlóczki of Hungary, Wolfgang Bányai of Austria, Mikko Kinnunen of Finland and Manne Wängborg of Sweden personally visited the schools. They were accompanied by senior diplomats from Belgium, Bulgaria, the Czech Republic, Germany, the Netherlands, Austria, Poland, and the EU.

The diplomats held interactive sessions with the students in English, French and German on the history of the European Union, its achievements, economy, policies, culture and values, and on the relationship between the EU and Kazakhstan. 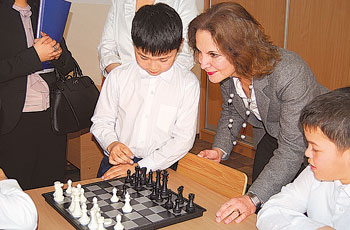 “This year, the European Union and Kazakhstan celebrate the 20th anniversary of the establishment of diplomatic relations. In terms of human life, 20 years is young. And that is why the first event, among many others to be held this year, takes place in schools,” EU Ambassador Bouchez told children at Lyceum No. 1 in Astana. “It is always a pleasure to speak to young and intelligent people, and to have open and candid conversations with them. This motivates our efforts to contribute to a bright future.”

Aidarbek Mendybayev, principal of Lyceum No.1, said the event was “of huge significance for schoolchildren. It gives them new knowledge and a feeling of involvement with other countries. You are giving our children the feeling that their opinions are important. And you are giving them confidence through their experience of talking and debating with foreign diplomats. I believe it will contribute a lot to their future careers. Who knows? Maybe one of our lyceum’s students will become Kazakhstan’s foreign minister in 20 years.”

The European diplomats found that many of the children they met already spoke fluent English, German and French. Many have vacationed or taken language courses in the EU countries and many of them plan to study in European universities. 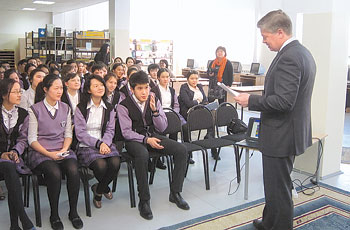 Ambassador of Finland to Kazakhstan Mikko Kinnunen held an open lesson in one of Astana’s schools.

Students questioned the European envoys about the EU reactions to the conflicts in Libya, Syria and Mali and about European projects for space exploration, green technologies, academic exchanges and youth employment programmes.

The diplomats quizzed the students about their knowledge about the European Union and its institutions. The students, for example, were asked to list all the EU Member States with their capitals or to guess which European countries are not members of the EU. Some of the schoolchildren turned out to be real experts in the EU, providing excellent answers to the quiz, and were given gifts and souvenirs.

By the end of the event it was clear that it was not an ordinary school lesson but a very intense discussion, full of new knowledge and fun for both students and EU diplomats, who said they would be happy to meet such interesting and smart audience again.

The “European Union Hour” is a first initiative in a series of events marking the 20th anniversary of the establishment of diplomatic relations between Kazakhstan and the European Union.

On 2 February 1993, the parties signed an agreement that set up diplomatic relations between the EU and Kazakhstan and since then, bilateral cooperation in trade, economy, energy, transport and the environment has been expanding every year. The EU is investing in youth projects in Kazakhstan in education, science and social policies.