The book “Zhetysu. Monuments and Museums” is a complete and colourful edition of the history of Almaty region, which has not yet been published in the country before. Turning its pages one can “visit” more than twenty museums of the region and see over a thousand of its sites. 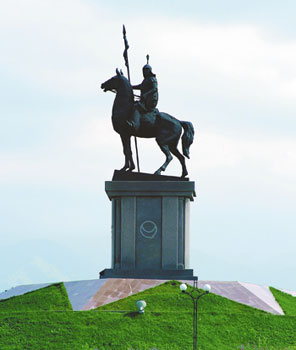 The land of Zhetysu located in the foothills of the Zailiskii Alatau has beautiful nature and many unique historic sites.

In fact, according to the chief editor of the Golden Book Vyacheslav Titenev, the number of monuments in the region of Zhetysu is ten times more than that in the official register. He discovered this when he took photos of them in four districts of the region and saw monuments in the small towns, which were not included in the list. For example, in the town of Panfilov in addition to the bust of the war hero he found five other monuments and in the national park “Altyn Emel” the keeper showed him the newly found petroglyphs.

Thus, there was a new look at certain things and new openings when the book was published. For example, Vyacheslav Titenev was surprised by details of biography of Nauryzbay Batyr, a true hero and commander, whose life was devoted to the fight against Dzhungars. The authors of the book not only provided the photo of the monument erected at the entrance to the Kaskelen, but also information about him: they carefully studied the lives of the characters and events of that era.

The land of seven rivers – Zhetysu, – located in the foothills of the Zailiskii Alatau has beautiful nature and many unique historic sites.

“The new book, of course, will draw great interest among potential tourists, both domestic and foreign,” says Vyacheslav Titenev. It will be also in demand in schools and universities.

As written in the introduction to the book, the historical and cultural heritage of Zhetysu is the foundation of historical memory of people and true patriotism. The history of the country and its study should become necessary and available to the general public. The memory about achievements of our ancestors will allow the society to better understand its purpose. It is noteworthy that the whole history of this region over the past century in given successively in the publication.

Realizing the importance of archaeological, architectural, natural objects, and having information on the events associated with them, young people will be aware of the need to protect historical and cultural heritage.

The Almaty oblast is the third richest region in this sense along with the South Kazakhstan and Zhambyl regions. Saki mounds, in one of which was found the Golden man, petroglyphs on the rocks of the Tamgaly Tas and other places, Singing Dunes, the camp of Genghis Khan and Charyn Canyon – all these attractions related to the history and culture of the region provide insight into spiritual life of ancestors.

Today the “Cultural Heritage” state programme and the adopted regional project on the protection of Zhetysu monuments have drawn a lot of attention to the regriches cultural riches. The project’s main purpose is to create an integrated system to study cultural heritage of the Almaty region. In recent years, about 50 new monuments were erected, including to batyrs Raiymbek, Karasai and Nauryzbay, biys Balpyk and Eskeldy, Kablisa zhyrau (Ush Baiterek), Kadyrgali Zhalairi and Suyunbaev Aronuly. Restoration works were conducted on the sites of Talhir, Koilyk, mounds Issyk, Turgenev and Maibulak camps. All this is told in the book “Zhetysu. Monuments and museums” published in three languages, Kazakh, Russian and English.