By Yelena Kuznetsova in Culture on 13 March 2013

ASTANA – Kazakh artists successfully represented the country in the gala concert “Young Stars of World Ballet” held in the German city of Mainz. 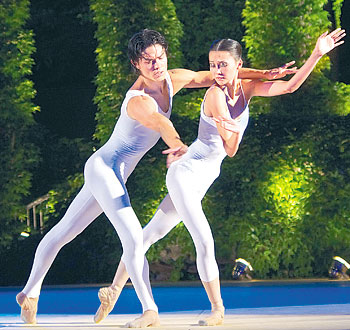 In a letter to Kazakhstan’s Minister of Culture and Information Mukhtar Kul-Muhammed, Director General of the International Federation of Ballet Competitions (IFBC), first vice-president of the International Union of Choreography, Honored Artist of Russia Sergey Usanov expressed gratitude for successful performance of our young dancers.

Amid young talented artists from different countries, prize winners of the international competition of Yuri Grigorovich “Young Ballet of the World,” and other most prestigious national and international contests, a duet of soloists of the Kulyash Baisseitova National Opera and Ballet Theater, Aigerim Beketayeva and Tahir Gatauov showed their skills.

In his letter, Usanov noted that Beketayeva and Gatauov, with their inspirational performance, contributed significantly to the international programme of classical ballet, thereby entering into a cohort of young talents of the world choreography.

“The International Federation of Ballet Competitions congratulates the Ministry of Culture and Information on the success of young dancers from Kazakhstan in Germany and expresses gratitude to the artists and their teacher Galiya Buribayeva, the management of the theater and chief choreographer Tursynbek Nurkaliyev for consent in principle to participate in important international event,” the letter read.

Last year was an eventful and a good one for Kazakhstan’s young artists.

Aigerim Beketayeva for the first time took part in the international competition “Young Ballet of the World” of Yuri Grigorovich. Despite the lack of experience, together with Tahir Gatauov they won diplomas. Their performance in Sochi received accolades from the press. Many journalists wrote that the Kazakhstan’s artists danced even better than the winners. That is why Beketayeva and Gatauov had been invited along with the winners to participate in the gala concert in Germany.

Having returned from Sochi, they immediately began preparing for a trip to the Bulgarian city of Varna for the oldest ballet competition in the world where Aigerim Beketayeva took bronze and Tahir Gatauov was awarded with a diploma. 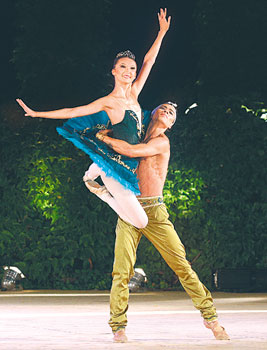 Soloists of Kazakhstan’s ballet impressed international public with their skills.

“I am lucky,” Beketayeva said. “Just after my coming to the theater I had an opportunity to participate in two international competitions which provided a strong impetus for further development. I have understood what the theater is. In each concert, each performance, the artist discovers something new and gains experience.”

The young dancers are very thankful to their teachers Galiya Buribayeva and Tursynbek Nurkaliyev who trained them for the competition and supported in difficult times.

“They must have an iron patience to endlessly repeat with us the same thing, perfecting every move. If it were up to me, I would put them a monument while alive,” Gatauov says.

The young artists received proposals from other companies.

“But we will not swap our theater for any other,” Gatauov said, “especially since in the near future a new “Astana Opera” theater will open.”

Now the young artists are working hard. Aigerim Beketayeva recently premiered in the “Les Sylphides” and “Swan Lake,” and on March 6 for the first time she danced the part of Gamzatti in the ballet “La Bayadere” by Ludwig Minkus.

In late March, Beketayeva and Gatauov are going to participate in the Rudolf Nureyev contest in Budapest. In the summer, the duet will take part in the Moscow International Competition. In September, together with Honored Artist of Kazakhstan Madina Basbayeva, the winner of international competitions Tahir Gatauov will perform in the gala concert “World Ballet Stars” in the Paris Theatre des Champs-Elysees.