ASTANA – With the relocation of the capital from Almaty to Astana back in 1997, ambassadors and diplomatic missions moved to the new political centre of the country. Over the years, the number of activities held by missions in Astana has increased with the pace of human migration to this city on the steppe. The Annual Charity Fair is one of the main social events organised by diplomatic missions in Kazakhstan and has already become a capital tradition. Eleonora Kopecká, organiser of this event and wife of the ambassador of the Czech Republic, spoke to The Astana Times on the need for events like the Annual Charity Fair and the importance of charity itself. 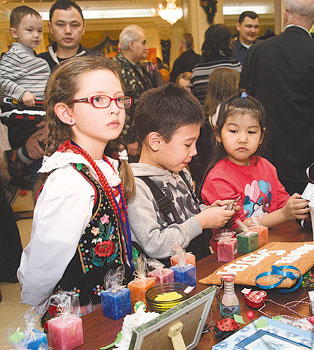 Annual Charity fair attracts people of all ages with an aim to do good.

How and when did the idea of holding a charity event on New Year’s Eve arise?

I arrived in Astana on March 19, 2008 and, of course, I had to adapt to a new city and to life here, as well as to the duties that come with being the spouse of an ambassador. As a woman, I thought of organising a useful activity and the idea of charity came up. This event [the Annual Charity Fair] is held not only by us, the Czech Republic, but by all embassies accredited in Astana, because all of us are women and mothers, and we want to help children. When we first arrived in Astana, we lived in the Radisson Hotel for a month. At that time the director general of the hotel was Austrian. We had a talk with him and manager Farah Willey and agreed that we would jointly organise a charity bazaar and the Radisson Hotel Charity Ball. I set the date as the first Sunday of December. This bazaar is a long-lasting tradition almost all over the world but here we have been holding it for only five years. Nevertheless, we have had really good results and I can proudly say that everything is going very well with it.

Who is involved in the organisation of the event?

Earlier this year we created the LaDiCA club, which stands for Ladies Diplomatic Club Astana and unites spouses of ambassadors, embassy staff and representatives of organisations working in Kazakhstan. I am the president of the club. We have our own charter, a beautiful badge and a website, www.ladica.kz. The club is mainly engaged in charity work and organising the bazaar, which brings together all embassies. Full club members pay membership dues.

Do you cooperate with state bodies, NGOs or private companies in Kazakhstan?

Our club is a non-profit and non-political organisation with the primary objective of conducting charity work. However, we work with all who approach us and anyone who asks for help. Certainly we try to listen to everyone, and after researching the issues we help the most disadvantaged. I am very glad that the Ministry of Education, Ministry of Health and the Ministry of Foreign Affairs trust us; we are grateful for it. We all do this not for advertisement but to help the children of Kazakhstan.

How are funds raised at your events distributed?

The funds are distributed by the committee. Prior to that we discuss and check the information on all participants of the fair. We ask for what purposes the money will be used. We do not refuse to help anyone but we check all orphanages. Everyone knows that participants have the opportunity to ask questions or tell us about people in need. We help orphanages, homes for the elderly and sick children who need surgery and rehabilitation.

Are you involved in any other projects?

I think the charity project is enough for us. This project is already at such a level that it is an endless job. For example, today I met with the vice-rector of the law department. Last year, we paid for the studies of two students, and now we have decided to prolong the payments until they graduate. Now we will consider providing payments for two more students for a one-year period. All of them are from low-income and needy families. They will receive certificates on the Nauryz holiday.

On that note, I’d like to wish all residents of Astana and Kazakhstan success, good health, happiness and well-being. I congratulate all on the beautiful holiday and wish Kazakhstan only prosperity in the future.