By Askar Beysenbayev in Sports on 20 February 2013

ASTANA – Kazakhstan’s national women’s tennis team has won its way into the playoffs of the international Federation Cup. 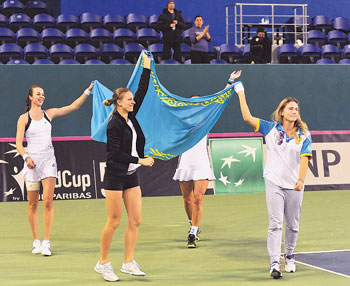 Kazakhstan’s national women’s tennis team has won its way into the playoffs of the international Federation Cup.

After previous victories over Thailand and India, the team won a decisive series of matches against Uzbekistan, the leading nation in their group.

Ksenia Pervak of Kazakhstan won the first match in the series against Uzbekistan’s Nigina Aburaimova and beat her in straight sets (6-0, 6-4).

Kazakhstan’s Yaroslava Shvedova won her first set against Akgul Amanmuradova of Uzbekistan 6-1. But she then lost the next two sets after a tough duel (7-5, 6-4).

The outcome of the series was decided in the women’s doubles match between Yaroslava Shvedova and Galina Voskoboeva against Nigina Aburaimova and Akgul Amanmuradova. The Kazakh pair defeated their opponents (6-2, 6-4).

The playoffs of the second World Group will be held on April 20-21. The Kazakhstan’s women’s team will then fight for the right to play in next year’s second World Group in the tournament. They may play teams from France, Ukraine, Belgium and Argentina.

The national women’s team is currently in 19th place in the updated rankings of the Federation Cup, improving its standing by five rankings.

The Federation Cup, or Fed Cup, is the largest female international tennis tournament in the world and is the equivalent of the Davis Cup for men. It is organized by the International Tennis Federation (ITF) and was first held in 1963. The Fed Cup is held between different national teams.