The Prices We Pay at a Crossroads

I loved the huge, old trees that shaded my flat on Abai Prospect so I felt disturbed and sad to see workers cutting them down for the new Metro station. I still hate to see the gap in the old trees, but now I use that Metro station sometimes to get to work. We always pay a price. 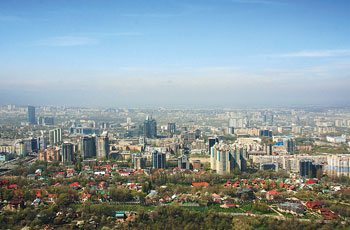 A panoramic view of Almaty

As a boy, forced to do propagandistic weekly drills of diving under school desks that would protect us from Soviet H-bombs, I never dreamed I would live in Kazakhstan, or even that it existed. As a teenager in New York, only a mile from the UN as Khrushchev banged his shoe in rhetorical anger, the idea of even visiting what was then the Soviet Union never crossed my mind. But now my home is Almaty.

A foreigner living in Kazakhstan pays many prices. I had to fly half a world away for my brother’s wedding in California. Although I speak decent basic Russian, I never completely understand what people say. I can’t even try to negotiate the bureaucracy, so in any serious problem and must find someone for help.

But for me, Kazakhstan is the best possible land of opportunity. I am laughing when I compare this country to America’s Wild West, but there is some similarity. Too much is uncertain here, but much more is possible. For decades I lived and traveled around the world – Europe, South America, South Asia, Africa – and always wondered if one place in the world had the best combination of options and resources. Then the Soros foundation offered me a year of teaching in Bishkek (in neighbouring Kyrgyzstan). I soon decided that, despite many frustrations and limitations, I should be in Central Asia. I love the crossroads culture of Kazakhstan and am more than happy to pay its prices, which seem weak and shadowy compared to the benefits.

I enjoy opening this corner of the world to friends and colleagues whose understanding of landlocked lands that end in “-stan” has been close to zero. People in the U.S. and Europe are faintly confused that I want to live in what they saw as a black hole, but intrigued. They are amazed at stories and photos that suggest the layered variety of life in a place crammed with energy and options. A night picture of Almaty on my Facebook page was wildly popular. Lepyoshka? Wow—beautiful bread…. Shymbulak? Impossible to imagine. Kumiss? You must be joking! The cathedral at sunset? Where can I buy one?

The main reason I stay are my students. Young people in Kazakhstan show the same variety as everywhere else: from idiocy to venality to genius. But the best students here are truly world-class, open to ideas in a way possible only in a culture changed by crisscrossing travelers for 2000 years. When I stood in the front hall of Turkestan’s Mausoleum of Khodja Akhmed Yassaui, imagining the fellow scholars and students of 1500 years ago, I felt a little closer to my iPhone-toting students of KIMEP and other universities where I occasionally teach. Many, though infected by Western consumerism, still respect the idea and passions of knowledge. Students here quickly learn to think and discuss flexibly in class, and in the hallway. They realize how their world will be opened up by the ability to ask and answer questions.

My lifestyle goals seem very different than those of most foreigners in Almaty. Why should I prefer a private car and driver when I can have the discomfort and humiliation of bus 29 at eight on Monday morning? What is the appeal of an empty shop selling Pierre Cardin compared to the human traffic jams of Barakholka bazaar the day before Women’s Day? Why not occasionally call myself “Janibek”? Why not get huge approval simply by saying “hello”… in Kazakh? If I wanted to eat at Hardee’s and hang out with people like me, why should I move around the world?

So yes, almost all of my friends are from Kazakhstan. It’s true that society here is more tribal than in America, and friendships are harder to engineer in Almaty than in, say, St. Louis. But Almaty people are more willing to help find a nice flat at a good price, introduce me to the ex-Minster of Defense, and point out the woman who sells the cheapest basil in the green bazaar.

A big reason I feel at home in Kazakhstan, and across Central Asia, is its comfortable balance between dignity and playfulness. Young people especially seem to appreciate my twisted sense of humor and odd jokes, and I love visiting the families of local friends and have the kind of dinner that, in the American Midwest, is called a “gut buster.” In most ways, Russian and Kazakhstani families are like families anywhere. But the informal intensity of a family gathering in central Asia is a little special. The challenge of a table full of food that you know you will barely dent, but have to try. New Year’s party in the village home of a Russian family. The bag of baursaks and other goodies that make me feel that my next stop is a caravanserai on camelback. The urge to please each other.

I especially feel at home because I found someone to help me create one. Nailya is from Pavlodar but now sees Almaty as home. She has the humor, warmth and solidity that Kazakhstanis wear so well but adds a naturalness that is rare. She has introduced me to her family, including mother and grandmother, which has definitely deepened my sense of family life here. Our household is a crossroads, too, since our cultures and languages are different and her ideas of married life are more traditional than mine.

Kazakhstani life opens many new paths to me. It was intense to be treated by a popular shaman, and feel the power of updated traditions that reach back to ancient China and Siberia. Some crossroads are invisible and almost indefinable, but impossible to dismiss. I don’t know how much she helped me, but she knew things about me she had no way to know, and she certainly reminded me we were in Kazakhstan, not England.

I believe that, sadly, the world overemphasizes power, fancy technology and cash flow but undervalues their cultural and human equivalents. It is all important, but the balance is wrong. So I have gripped the opportunity of learning more about the richness of Russian culture. As a young man and greedy reader, I read books on Russia’s history, literature and the revolution, but had almost no sense of its depth and expressiveness. I have learned a little here that means a lot.

I have also tried to get some sense of the thrust of Kazakhstan culture. It was a complex, moving experience to visit the home of Djambul, with its construction of music, poetry, and tradition. I enjoy hearing, and trying to play, traditional music like the kobyz.

Kazakhstan is not a tourist destination on par with India or Peru. But I have taken advantage of my loose professor’s schedule to visit most parts of the country, walking along the river in Kostanai and seeing ice sculptures in Karaganda. The Altai Mountains are simply magical, and a summer morning there will never really fade. Shymkent is full of rough energy and cheer. Astana is… well, Astana, all shiny vertical and earthy horizontal.

I realize that I’m very lucky to be in this position in this location at this moment. I can pick and choose my work because so few people here have my education and experience. I have had many stimulating consulting opportunities, and teach English less for the money than for this way to be a part of constructive change.

Doing business in Almaty is a complex experience. Many things are difficult here, with many more barriers to creating a small business or consultancy. Other parts are easier: meeting important people is much less formal, only because many seem to want to meet new people. Kazakhstan has many needs, like advanced research and writing skills, that make me feel much more valued than I ever felt in the U.S. Although I often face new cultural norms and expectations, I enjoy working with people who are overwhelmingly decent and constructive.

I came here as a teacher. KIMEP, despite its many flaws, is profoundly needed by Kazakhstan as a bridge across geographies, cultures and times, and I am lucky to be useful there. Education, perhaps like that designed for Nazarbayev University, is essential. However, the skill that matters most is the skill to adapt and imagine, more than to control and even more than to understand. Albert Einstein knew this, and it is more true than ever. The emerging generation of Kazakhstan is ready for this idea, probably more so than many of their teachers. In a dynamic world teachers must be ready to learn from their students, and mine teach me a great deal. For example, it can only help to learn not only from the strengths of Western education, but also from its weaknesses.

After only 3 ½ years, I still understand very little about this country except its complexity. However, I allow myself the luxury of making wishes. I wish that more people could shake off more of the Soviet structuralism that has little value in a digital world. I wish its leaders had more faith in their citizens and in the contributions of new, strange, uncomfortable ideas, and less faith in power. I wish Kazakhstanis of all backgrounds could see themselves from outside and better understand their potential. I wish foreigners and locals could do more to find a better, hybrid culture. The Kazakhstani perception needs to go beyond Hollywood’s suggestion that everything is perfect in the West, and is only worthwhile to the extent that it copies the West. I wish the brake of corruption could be lifted from Kazakh society.

Our new crossroads is the Internet, which has emerged at the perfect time to benefit Kazakhstan. Its multi-layered dialog can dissolve the miles between here and many other places, while taking advantage of the natural intercultural curiosity and skill that so many young people have. The nation is working hard to encourage Internet capacity, both technological and human, but I think needs to accept the crossroad’s price of new ideas. I think the national goal can do far more than accept the Internet, and help to lead it by developing and contributing its own perspectives.

What impresses me most about Kazakhstan? Its ability—its hunger—to reinvent itself. I want to see more clarity about the nation’s direction beyond industrial production and international status, but its drive is clear – drive like those that propelled America and China to global importance. I feel that more of that drive needs to consider the social, cultural, human needs of the nation.

So some morning, if you see an odd small man with a big mustache looking up at the trees and down at the Metro on Abai Avenue, it could be me. Say “zdrastvuitie” or “salam” and I will probably cheerfully answer.

The author is an Associate Professor at the Department of Journalism and Mass Communication of the Kazakhstan Institute of Management and Economic Prognosis (KIMEP). He also works as a consultant, and has lived in Almaty for 3 1/2 years

The Russian-language edited version of this commentary was published in Esquire magazine in January 2013.