By Gulshara Abdykalikova in Op-Ed on 20 February 2013

The role of women in building a strong society was reflected in the president’s state-of-the-nation address, Kazakhstan-2050 Strategy: A New Policy of the Established State, which also focused on maternal and child welfare. 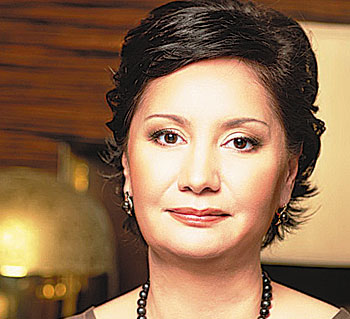 Women are “the support of the family and of the state; our country’s future depends on how we bring up our children,” the president said.

Kazakhstan ranks 31st out of 135 countries in the World Economic Forum rating of gender equality. Family values are important in our society. To support these values, the National Commission for Women’s Affairs arranges public meetings with model families. It has also been assigned the task of enhancing patriotism in Kazakhstani youth. This year, the commission plans trips to remote districts in order to establish contact with local youth leaders and continue to work on the motivation of young workers.

This century will be dominated by active people. Unfortunately, sloth and the pursuit of easy money is not uncommon. The president called these characteristics social infantilism. The great poet and thinker Abay Kunanbayev said that he who works and is not lazy will be rich. Albert Einstein said that it is not nice words but work and its results that creates outstanding personalities. Our youth needs to be motivated to work, and a man of labour should be given special respect in society. Socially useful work needs be encouraged in every way.

We intend to use electronic and other media to this end and appear in television and radio programmes with talks and discussions on national traditions, character building, motivation to seek knowledge and meaningful work and parents’ and children’s responsibilities and duties. People’s welfare is the foremost concern of the country. It is more important than the GDP, gold currency reserves or international ratings. After all, unless we educate the younger generation properly and fit them to be masters of the country, all the mineral resources and innovations are worthless and all our ambitious plans for the future do not make sense.

“We need to build a religious consciousness that is aligned with the traditions and cultural norms of the country, and emulate best behaviours,” said the president in his address. “Youth, particularly neglected children, easily fall under the influence of religious sects, extremists, drug addicts and criminal groups,” he continued.

This is a signal to society that families and schools must conduct coordinated educational processes to prevent children from falling under dangerous influences, and the commission has to focus not as much on fighting negative consequences, but on understanding how to counter their root causes. Demographic development is another important aspect of state policy. Although there has been an increase in the population of Kazakhstan as a whole (mostly in the southern regions), in four regions it is declining due to low birth rates and a negative migration balance. To stop this decline, the state programme Generations Fund for 2010-2014 has been adopted.

We are concerned about the frequency of suicide, teenage pregnancies and abortions and violence against women. To fight these social ills, legislative amendments have been proposed penalising early and forced marriage, the abduction of young girls and inducing girls to undergo neke kiyu (a type of wedding ceremony in accordance with religious laws of Islam).

In his address, the president also expressed concern about domestic violence against women and children, demanding that penalties for such offenses be stiffened. The commission will be working on this task and at the same time supporting and expanding crisis centres to provide psychological, medical and legal assistance to domestic violence victims. There are 28 such facilities in the country and we are soliciting funding for them; the relevant regulations are currently being created. The crisis centres alone, however, are not a solution. To address this challenge, public awareness of the problem should be increased as well.

Society is changing fast under the influence of globalisation, and along with progress, some regressive phenomena are evident. Among the latter is the choice of our girls to wear hijab, oblivious to the roots of this tradition.

“Kazakhstan’s girls,” the president said, “must have more access to good educations and good jobs; they should feel free. They should be able to use credit cards, drive cars, make careers and wear modern clothes instead of wrapping themselves in fashions that are alien to us, that we have never worn. Our nation has its own culture, traditions and customs.”

We plan to team up with professionals to raise awareness among young people and students regarding this issue. Sometimes, women dress simply to attract attention. Then there are cases when young girls, without any idea about the true values of Islam, are drawn into a sect fraudulently, or are even bullied into it to spread harmful ideology or to be used as suicide bombers.

Resolution 1325 of the U.N. Security Council, On Women, Peace and Security, states that countries must ensure peace and security through the integration of gender aspects in their national security policy. This means increasing women’s involvement in decision-making about security, peacekeeping operations and the settlement of conflicts and disputes.

The prosecutor general’s office is upgrading the law enforcement system and the Foreign Ministry is scheduling an international conference on the implementation of the resolution.

The topics of global and regional development and women’s involvement in the political, economic and social life of the country were also raised at the recent Third Eurasian Women’s Summit. One of its goals was to train local businesswomen and share their success stories. It said that the Customs Union opens ample business opportunities to Kazakhstan’s women to develop Kazakhstan’s, Russian and Belarusian markets and establish joint ventures.