By Anel Adilbayeva in Culture on 20 February 2013

ASTANA – For the first time, selected artwork from the Caucasus to Kazakhstan will be displayed at Sotheby’s in London in a selling exhibition called “At the Crossroads,” open from March 4-12. 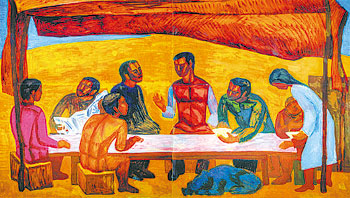 One of the masterpieces to be presented at Sotheby’s is a painting titled “Virgin Soil. At lunch,” 1960, by Salikhitdin Aitbayev.

According to its description, the exhibition will bring together 50 pieces by artists from post-Soviet republics including Armenia, Azerbaijan, Georgia, Kazakhstan, Kyrgyzstan, Tajikistan and Uzbekistan.

Organisers intend to introduce the diverse styles of the region, “socialist-realist to non-conformist, right through to the forefront of emerging contemporary, arising from the unique encounter of ancient historical heritages with evolving modern day techniques.”

The exhibition is being organised with the participation of the Rysbek Akhmetov Gallery in Almaty, which has provided paintings by Salikhitdin Aitbayev (“Virgin Soil. At lunch,” 1960) and Bakhtiyar Tabiyev (“Village at the Caspian Sea,” 1985).

In Soviet days, Aitbayev’s work was criticised. He was accused of copying the “bourgeois” style of Picasso, which contrasted with the ideal of Soviet art. Aitbayev had to make changes to his work. Now, his work is included in the permanent exhibition at the Kasteyev Museum in Almaty and is recognised as classic Kazakhstan art.

“Village at the Caspian Sea” depicts traditional life and spiritual values and reveals the ties binding nature and humans, which have become the artist’s calling card. Permission to ship these paintings abroad was given by the artists’ relatives, as both artists are deceased. Elmira Akhmetova, director of the Akmetov Gallery and daughter of Rysbek Akhmetov himself, is in charge of preparing the exhibition. Previously, Kazakhstan’s art was shown by another London-based auction house, Christie’s, which displayed sculptures by Rysbek Akhmetov and lithography by Evgenii Sidorkin. Rysbek Akhmetov was one of the first sculptors to create genuine interest regarding Kazakhstan’s heritage in contemporary architecture. Akhmetov’s works carry a diversity of feelings, mood and rhythms, reinterpreting traditions of Kazakh art.

Critics praised that event as a new page in the history of the region’s art, which has revealed new names for the international market. For the Kazakhstan artists, who had never been shown at an exhibit on this scale, the Christie’s show was a breakthrough, since Christie’s curators rarely select artists who don’t have a successful history in auction sales. Participation in the Sotheby’s exhibition is another major step for the Kazakhstan artists.

Sotheby’s is a multinational corporation, which was established in London in March, 1744 and currently is U.S. owned. Sotheby’s is the second largest auctioneer of fine and decorative art, jewelry and collectibles, and the world’s fourth oldest auction house, with 90 locations in 40 countries.