By Askar Beysenbayev in National Overview on 6 February 2013

ASTANA – The triumph of Kazakhstan’s national Olympic team in the United Kingdom and the return of our national heroes back home will long remain in the memory of the fans. Some of our athletes still continue to reach the pinnacle of sports and some, such as Serik Sapiyev, have begun to pass their invaluable experience to those who in the future will glorify the country. 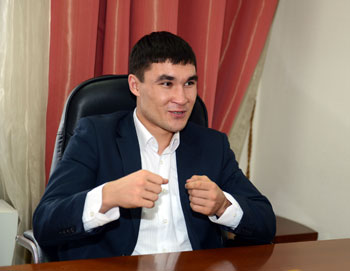 Serik Sapiyev will work to strengthen the national boxing team.

A few weeks ago, Sapiyev, a gold medalist at the London Olympics, was appointed the sport director of Kazakhstan Boxing Federation. His responsibilities include control over the development of boxing in the country and supervision of youth teams.

Does your appointment to the federation in any way indicate the final completion of your sports career? Your fans are still hoping to see you at the Brazilian Olympics.

First of all, I thank our federation and its president, Timur Kulibayev, for the establishment of the conditions for my training and successful performance at the London Olympics.

Secondly, I have fully left professional sports and will now share my experience gained in the ring. As they say, I know boxing from the inside. Yet, I have little experience and skills in administration. But I think it will come, especially as everything in the federation is clearly arranged and structured. Everyone knows how and where to best apply his knowledge and experience.

In the near future, I plan to study abroad, to improve my English and thus become a qualified professional in sports management.

Recently, I took part in the meeting of the federation’s Executive Committee where we discussed plans for 2013.

What are your first impressions?

For the first time, I saw how much work must be done to prepare the team and ensure its participation in a competition or championship. 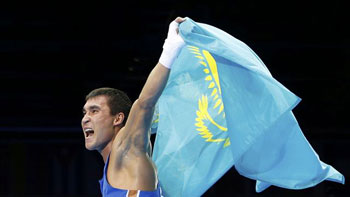 Serik Sapiyev flies Kazakhstan’s national flag after his spectacular win at the London Olympics in August 2012.

What are your priorities for the direction of the federation?

Priorities today are aimed at the regions and one of the main areas is the construction of a centre for boxing. A powerful foundation is being laid for the preparation of future champions and our sport now is given much attention. There are no problems with funding, traveling (including to distant countries) and participating in various tournaments where we gain invaluable experience and practice. In addition, a variety of specialized workshops for referees are also organized in Kazakhstan. I think the construction of a boxing academy in Almaty is a great idea and a breakthrough for our country.

Do you support our team’s upcoming bouts against athletes from several leading boxing nations?

The tournament to be held February 14-17 in Astana will involve the teams of Kazakhstan, Uzbekistan, Azerbaijan and Ukraine. We have already held similar bouts, such as before the 2012 Olympics. Those matches gave us experience in the evaluation of the status of the leading boxers. It was the decision of the coaching staff and I absolutely support it. This practice helps lead to the successful performance of our athletes in various continental and international tournaments. In turn, I personally invite all fans to come and support our team. I wish the media would also pay more attention to sporting events and provide broader coverage of our sport achievements.

By the way, the World Cup for the first time may be held without protective head gear. What is your opinion about this change?

I strongly support it. Boxing has become more spectacular and fights are more open. Our sport consists of many parameters and a good blow is just one of them in addition to tactics, techniques and moving around the ring. The “closed” boxers had no technique, but could equally perform with strong rivals and even win. Previously, there were boxers who had never punched hard, but could win the battle. Why? Because they were well-protected fighters and had good tactics. It was a real show then and the whole world now comes back to that. I am glad that these changes were proposed by the Kazakh federation. And for the first time in the world, the national championship was held under the so called “new-old” rules, i.e. without head gear.

What is your forecast for the upcoming Summer Games in Brazil, especially for our boxers? Will they be able to win several gold medals?

All efforts of our federation are concentrated on this purpose. Now, the federation strongly supports, including by funding, the opening of boxing centres throughout the country, participation of our athletes in various tournaments and training process.

As for the forecast, we will for sure win one gold medal but, of course, we all want more. The backbone of the team has been already formed with the old guard leaders: the Olympians. But talented youth are also developing, such as Bekzat Sattarkhanov who became an Olympic champion at the age of 20 and Bakhtiyar Artayev at the age of 21. And just maybe the future medalists of Rio de Janeiro Olympic Games, which will take place in three years from now, are now under 18.