By Yelena Kuznetsova in National Overview on 6 February 2013 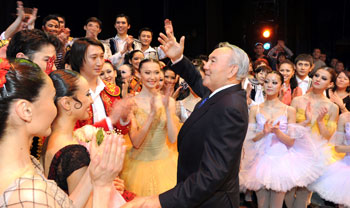 President Nazarbayev attended the Don Quixote ballet at the Kulyash Baiseitova theatre in Astana on Jan. 27, enjoying a light moment with the performers afterwards.

President Nazarbayev was invited to attend the “Don Quixote” premiere on January 9 by leading ballet stars Madina Basbayeva and Tahir Gatauov when he attended an awards ceremony for writers and artists in Almaty. After the January 27 premiere, the President and Culture Minister Mukhtar Kul-Muhammed met the performers and posed for photographs with them.

Chief choreographer Tursynbek Nurkaliev said the troupe was delighted to be honoured by the president.

The artists thanked the president for his contributions to national culture including the recently constructed Astana Opera. It will open with Pyotr Tchaikovsky’s ballet “Sleeping Beauty” directed by the famous choreographer Yuri Grigorovich in July 2013.

On Feb. 2, Gatauov and Beketayeva, at the invitation of the International Union of Choreographers, performed in the World Ballet Stars gala concert in Germany. In mid-September, they will participate in three World Ballet Stars productions at the Paris Grand Opera.