ASTANA – Prime Minister Serik Akhmetov has given the green light to an ambitious programme of law reforms this year. 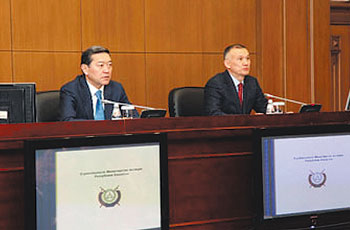 The prime minister participated in a planning conference at the Justice Ministry where Justice Minister Berik Imashev outlined plans for legal reforms in 2013.

Imashev said the Justice Ministry was preparing 12 new laws and was working with other ministries and state agencies to prepare another 36.

The process of legal reform is already well underway. In 2012, President Nursultan Nazarbayev signed 62 new laws and another 61 draft laws are currently under consideration by Parliament.

“This year, the government will submit 53 draft laws for the consideration of Parliament,” Prime Minister Akhmetov said.

The prime minister also instructed the Justice Ministry to submit proposals for reforming the execution of judicial acts. The ministry will continue its work to streamline administrative procedures and revise literary copyright law. It is also working to modernise patent legislation and simplify the registration of inventions to meet the standards of nations in the Organisation for Economic Cooperation and Development (OECD).

The patent reform process is designed to promote domestic inventors. It recognises that intellectual property law is essential to promote national competitiveness and fulfil the Strategy-2050 to make Kazakhstan one of the world’s 30 most competitive countries.

Prime Minister Akhmetov said the main task of the Justice Ministry was to enforce the implementation of new laws drafted within the framework of the government’s strategic development programme. “First, the ministry shall address current legal problems, detect their causes and comprehensively resolve them. Second, coordinate the rule-making activity of state agencies, ensure the quality of draft laws and reduce the number of unscheduled drafts,” he said.

The prime minister also instructed the ministry to speed up Parliament’s work in preparing new guidelines for state regulations.

“Starting this year, we pass to a new stage of cooperation with Parliament and the Nur Otan party in line with the national strategy for framing new official regulations,” he said.

This strategy has not been finalised yet because the state agencies have not agreed on their proposals, the prime minister said. Therefore, he instructed the Justice Ministry to take responsibility for completing the process and to coordinate the legislative initiatives of the government, Parliament and Nur Otan.

“The tasks of the ministry lie in strengthening its analytical work, detecting the reasons for legal claims, assessing the prospects for legal proceedings in different cases and participating in negotiation processes,” the prime minister said.