ASTANA – A new auto plant for the welding and painting of Nomad SUVs for Kazakhstan’s domestic auto market will open in Kostanay city over the next year. 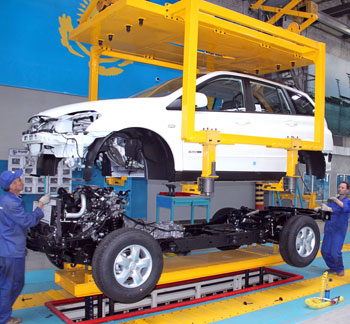 Kazakhstan has seen a steady increase in the numbers of domestically manufactured cars, and the trend points towards further growth as producers seek to benefit from the Customs Union regulations.

Agromash Holding has announced that the new plant will be turning out a new line of Nomad SUVs by the end of this year for the domestic auto market and for export to other countries in the Commonwealth of Independent States.

The project is being directed by the Agromash Holding engineering bureau, engineers from the SsangYong Motor Corporation of South Korea and other engineering experts from Russia, Italy and South Korea.

Agromash Holding said the project to set up the new plant consisted of eight stages: designing the plant and approving its equipment setting up the assembly line; preparing the welding process and staff; overseeing the launch of production; training the factory’s staff; overseeing production of the first prototype completed model; confirming its quality and certification and overseeing its introduction into the domestic and foreign markets.

Agromash Holding said the project was part of an investment programme to utilize the resources of the former diesel plant in Kostanay city. The South Korean SocieTech Company will provide the new equipment for the factory up to international standards.

Andrei Lavrentiev, director general of Allur Auto, said the Nomad SUV programme was the first of its kind on such a scale in the history of Kazakhstan. He said it would attract new investment and technology into the country.

The number of cars manufactured in Kazakhstan increased significantly in 2012 compared to the previous year. In 2011, the number of lines of cars marketed by Agromash Holding and Allur Auto grew with the addition of Chance cars, SsangYong Chairman Premium class sedans, Italian IVECO commercial vehicles and Russian UAZ models.

The Kostanay city plant now manufactures 5,000 SUVs per year. This will rise to a volume of 15,000 cars per year when the CKD (complete knock down) production process is introduced.

CKDs are complete automobile production kits: They are an increasingly commonly used way of supplying parts to a market, especially exporting from a primary producer to a market in other countries. CKD assembly has become a common practice in the international automotive industry, the bus and heavy truck industry, and the rail vehicle industry. Businesses sell CKD kits to their foreign affiliates and often receive tax preferences for providing local manufacturing jobs.

“A site of 40,000 square metres is being prepared to install the equipment to assemble Nomad cars at the (Kostanay) plant,” Lavrentiev said. “We plan to use Mercedes engines with other equipment imported from South Korea, Germany and Italy. Local engineering companies will produce various spare parts for the cars.”

Agromash Holding said $60 million in investment has gone into the Kostanay plant. The Nomad SUVs will sell for $22,000 each.

The Kostanay plant was set up under the 2010-14 State Programme for Accelerated Industrial-Innovative Development (PAIID) within the Industrialization Map of Kazakhstan.

The selling price of $22,000 for the SUVs will be 25 percent less than current market prices for such models in the domestic market, thanks to state benefits and customs preferences on import duties for the imported CKD kits.

The SUVs will be produced in gasoline and diesel models. The number of options will vary with the most luxurious models selling for $30,000 each. They will be available in four versions depending on engine and transmission. The clients will also have a fairly wide choice of colour.

Nomad owners will be provided with maintenance service through the Allur Auto dealer network in 12 regions across Kazakhstan. Spare parts will be available at accessible prices. Replacement brake pads, for example, cost 4,000 tenge ($26.53) per set.

“In the first year of production, we plan to produce 5,000 to 7,000 Nomad units,” Lavrentiev said. “Only 30 percent of them will be sold in Kazakhstan, because the domestic market is not as large as Russia’s since the total population is much less than Russia’s. Therefore, 70 percent of total production will be directed to the Russian market. We plan to increase annual production volume till 2017, and achieve a total production level of 15,000 cars per year.”

The Agromash Holding plant has a favourable location for exports to Russia and other CIS countries. It will provide the South Korean company with access to the auto markets of Central Asia, Russia and Eastern Europe. The Trans-Siberian Highway provides the plant with a direct communications link with the main automobile industries of South Korea and Japan and with the main markets of Western Europe and Northeast Asia. The Kyzylorda-Shymkent-Tashkent-Almaty road networks connect the plant with the main markets of Kazakhstan and Central Asia.

On January 16, the Allur Group of automobile companies published its assessment of patterns of auto sales in 2012. The study listed Hyundai Accent, Kia Soul, Chance and Toyota Corolla as the bestselling models, due to their competitive prices, fuel economy and maneuverability.

In late 2012, Agromash Holding said it would start producing the new Vida model from the Chance range in May of the current year. Chance models now sell for only $9,000 each. KIA of South Korea also introduced new models into the Kazakhstan domestic market in 2012.

2012 saw an increase in demand for low-cost, fuel-efficient cars and this trend is expected to continue.

KMC Astana Motors said the number of cars assembled and then sold in Kazakhstan rose in 2012, thanks to government support and to the stimulus of the far larger market provided by the Customs Union. Some 12.6 percent of all cars sold in Kazakhstan in 2012 were assembled in the country. The number came to 10,942 vehicles compared to 4,589 in 2011.

In 2013, KMC Astana Motors will open four new auto-centres in the 3S format (Sales, Service & Spare Parts) for Hyundai in Almaty, Astana and Kostanay and for BMW in Almaty at a cost of 3.4 billion tenge ($230 million).

In 2013, KMC Astana Motors will also start directly marketing the Hyundai i30 and i40, the Veloster and the extended version of the Hyundai Santa Fe (NC). Auto-Center Bavaria will introduce the BMW Z4, 5 series, 6 series and the new MINI Paceman three-door crossover.

In 2013, the official distributor of Subaru in Kazakhstan will launch its Forester 4th generation, the BRZ rear-wheel drive sports coupe and the new sports 4WD WRX STi. Toyota will introduce its updated RAV4 and the Hilux; Nissan will introduce a new generation of Nissan Almeras and the restyled Nissan Tiida.

The Hyundai Auto Trans car assembly plant plans to start production of large-capacity vehicles of 10 tons in 2013 (the Hyundai HD 270 and HD 500), as well as Hyundai all-wheel drive trucks.