ASTANA – The government of Kazakhstan has introduced a new border security law for the first time in 20 years. It came into force on January 16. 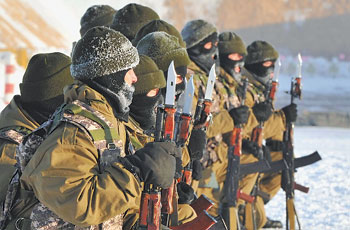 Defenders of state borders protect and ensure safety of the country’s frontiers.

The new law is designed to combat a wide range of threats to national security and the daily wellbeing of the people of Kazakhstan that have emerged in recent years. These include drug trafficking, illegal migration, international terrorism, religious extremism and separatism.

It was the first time the law had been amended and updated since the old one came into force on Jan. 13, 1993.

The new law takes into account the great changes in international relations, the country’s new foreign policy and the dramatically different economic conditions that have developed over the past two decades. It has provisions to deal with the increase in transnational trade and migration and the conditions governing state border controls since Kazakhstan created the new Customs Union with Russia and Belarus. It also has updated aspects that deal with the legal status of Kazakhstan’s sovereignty over the areas it controls in the Caspian Sea.

The new law was drafted after extensive consultations with the President’s Office and the Mazhilis of the Parliament of Kazakhstan.

The new law defines the areas of responsibility of state bodies participating in the protection and control of state borders. It decides the state body which will be responsible for protecting maritime borders on the Caspian Sea, and for retaining sovereignty over the seabed and its underground resources. The 1993 law had no such provisions.

The new law also consolidates responsibility for the protection of frontiers under the new State Border Commission. The commission will include representatives of all interested state bodies. They will be instructed to draft new proposals and recommendations on state border issues.

The 2013 law requires all authorities involved in enforcing border security to apply administrative norms and all national criminal legislation in the exercise of their duties.

To reduce administrative barriers and protect the constitutional rights of citizens, entry passes into Kazakhstan will be required only for foreigners and stateless persons. Citizens of Kazakhstan will be able to enter the country with only their IDs.

The new legislation is designed to make entering Kazakhstan a far easier experience for tourists, businessmen and other lawful travellers. However, this does not mean that the border will become transparent. All its security aspects will be preserved and enforced against violators.

The new legislation is also designed to increase security in communities in border regions. It contains a combination of balanced measures to ensure safety and freedom in these areas.

The law is also designed to encourage local communities to create their own voluntary groups to participate in patrolling and securing the country’s land borders.

The growth of these voluntary groups is envisaged as a gradual, evolutionary process.