ASTANA – After its first year in operation, Astana’s new E-ambulance service is proving its worth. 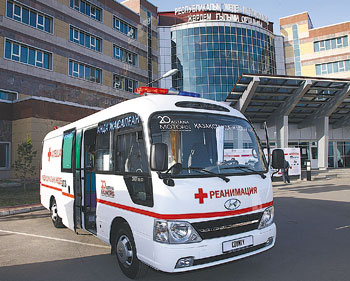 The service was introduced as part of the Smart Astana programme in December 2011. Since then, the ambulance service’s mortality rate has dropped to 98 people dying before reaching hospital in 2012 compared to 105 in 2011.

Thanks to the use of IT tablet devices, the accuracy of diagnoses and delivery time of patients to hospitals increased by 0.9 percent. Ambulances delivered 18 percent more patients to the hospital in response to emergency calls in 2012 compared to 2011.

Emergency medical care service is crucial to giving heart attack, stroke and accident victims their best chances of survival until they can be given full intensive care treatment in hospitals. There is a so-called “golden hour” in the international standards, which is a time during which timely and adequate medical care helps to save injured people’s lives. Astana’s ambulance service has now been upgraded to the highest global standards.

The new information systems and navigation devices in the E-ambulance fleet reduce travel time for patients and optimise the work of ambulance crews. Access to online consultations upgrades the quality of treatment they can provide.

The ambulances now carry full medical reference books on tablet PCs that describe all likely symptoms. The information on them is updated on a monthly basis.

Throughout the country, Kazakhstan has introduced two other new IT programmes to upgrade its mobile medical services. The Salamatty Kazakhstan, or Healthy Kazakhstan, railway health service was introduced in 2011. It operates two diagnostic trains, Densaulyk, or Health, and Zhardem, or Assistance. In the past two years, they have diagnosed 230,000 patients at 234 stations around the country and provided medical examinations for 63,000 people, including 25,000 children.

Twelve medical rescue stations are now based at the most dangerous sections of the national road system.

Since the programme was launched, the doctors of the mobile medical services have examined more than 530,000 people, conducted more than one million laboratory diagnostic tests and held more than 450,000 consultations.

The Constitution of Kazakhstan requires healthcare to be available for the entire population on an equal basis. The mobile medicine service with its fleets of helicopters, medical vehicles and trains provides the most remote inhabitants with the same full access.