By Askar Beisenbayev in Sports on 20 February 2013 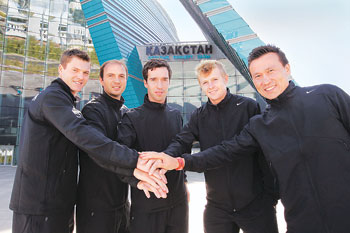 ASTANA – Kazakhstan’s national tennis team achieved a significant victory on their home court in the first round of the latest Davis Cup World Group competition. In the wake of that achievement, Kazakhstan Tennis Federation President Bulat Utemuratov recently spoke with The Astana Times about the success and future of Kazakhstan’s elite tennis players.

In the first round of the Davis Cup this year, our rivals were the Austrian team, a tough nut indeed. Many Kazakh fans, it must be admitted, did not expect the 3-1 victory over the masters standing much higher in world rankings.

Actually it was a win over rankings! Andrey Golubev, number 187, defeated Andreas A. Haider-Maurer, who is 80 places above him in the world rankings. We were happy with this victory and it was very important for us, especially because it gave confidence to Yevgeni Koroleyv against Jurgen Melzer, who is among the thirty best players in the world. It’s incredible but the 29th ranked player in the world was defeated by the 210th ranked player! Korolyev did his best in this match and brought the team the victorious point. After that, the third victory of Andrey Golubev in singles over Jurgen Meltzer was quite expected. But in the doubles match, Golubev with Yuri Schukin were less fortunate against the tandem of Peyia and Knowle. Perhaps this was the only time in these games when the higher rating of our opponents was confirmed by the result.

It’s worth mentioning that our federation organised a training camp in Dubai in December last year to prepare for this competition; therefore, they were well prepared for the matches. Of course, the difficulty of the situation for us was the fact that Mikhail Kukushkin, the highest ranked member of the team, had undergone two surgeries on both hips and had not completely recovered from them, so he could not take part in matches. Also it should be noted that Kukushkin, who is one of the most stable players, very successfully performed in his Davis Cup matches. I’d like to mention one more indisputable advantage of our team: all our athletes are very trainable. Generally speaking, as newcomers in the World Group, we were able to gain much-needed experience from the matches against such strong national teams as Argentina, Spain, Uzbekistan, Switzerland and the Czech Republic. 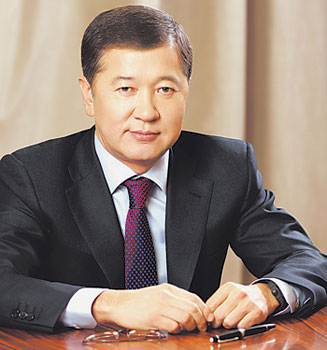 What was the victory over the Austrian team for you personally, as president of the Tennis Federation of Kazakhstan?

It has become a source of pride and inspiration for achieving new goals. With each success our country is approaching leadership among the world’s tennis powers. As a matter of fact, it was a collective victory. I cannot help noting the contribution of my deputy in the Tennis Federation, Adil Burlibayev, and all members of the coaching staff, starting with Dias Doskarayev, the captain of the team and a former player; and Mieczyslaw Boguslavsky, head coach of general and special physical training. They found the right training and psychological approach for each player at the competition and off the court.

What are the key areas for developing Kazakhstan’s tennis in the future?

We adopted the programme for tennis development approved by the head of state. Thanks to his support, tennis in our country is one of the fastest-developing sports, although so far it has not been promoted among the masses and it has needed to generate its own players. That is why the strategic goal is the creation in each region of tennis centres equipped with everything necessary for the development of tennis skills. Great importance is attached to children’s and youth tennis. It is among our priorities. Interest in this sport among youth is growing from year to year. In 2012, the number of people playing in professional domestic tournaments and registered junior players increased by 20 percent. We organise the training of future champions inside the country, including in the format of master classes of world stars. For example, for this purpose we invited international stars Martina Hingis and Dinara Safina and our compatriots Elena Likhovtseva and Irina Selyutina, the most titled representatives of Kazakhstan’s tennis. We also send talented young players to the best foreign tennis academies in the world. Making tennis more widespread, paying more attention to it and attracting players from other countries as examples, we will, I think, over time, be able to create Grand Slam winners.