By Marina Parkhomenko in Nation on 20 February 2013

ASTANA – There are now more people living in Kazakhstan than in the past few years, and they live longer and have healthier lives than before, Minister of Healthcare Salidat Kairbekova said at a recent board meeting of her ministry. 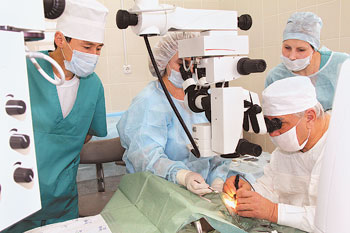 The advancement of healthcare sphere and education of medical specialists are major goals of the state.

According to Minister Kairbekova, the population increased by four percent compared to 2011, while life expectancy has grown by five months, from 69.01 years in 2011 to 69.6 in 2012.

Presenting the performance report on the second year of the state programme Salamatty Kazakhstan (Healthy Kazakhstan) 2011-15, Kairbekova added that work conducted in the area of mother and child protection resulted in a 23 percent decrease in maternal mortality and a nine percent decrease in infant mortality. Women and children are regularly given preventive examinations, screenings and immunization. In 2011, Kazakhstan launched a vaccination programme for children against pneumococcal infection.

Developments in neonatal surgery facilitated an increase in the malformations detection rate and timely surgical intervention. Post-surgery survival is up to 87 percent. Since 2010, the guaranteed volume of free medical care includes in-vitro fertilization, which increased by six times more cycles in this year.

Mortality of cardiovascular diseases was reduced by 20 percent; of cancer pathology by three percent; accidents, poisoning and injuries by 5.3 percent. In compliance with international standards, 20 stroke centres were opened in the regions, with another 28 to be opened before the end of 2013 to fully meet the needs of citizens. Kairbekova reported active development in transplantation in 2012. More than 90 transplants (kidney, bone marrow, heart, pancreas and others) were provided to adults and children. The most significant transplant event in 2012 was a heart transplantation.

Health screening, part of the national healthcare programme, reached approximately 6.9 million people. More than one million were diagnosed with diseases, and 600,000 were cured. Related to healthcare improvement is the ongoing development of transport medicine and sanitary aviation.

Chair of the Mazhilis Committee for Socio-Cultural Development Dariga Nazarbayeva brought attention to shortcomings in the screening programme, specifically in the formation of a single information system, emergency care as well as to issues with understaffing.

Deputy Prime Minister Erbol Orynbaev, who attended the meeting, outlined the 2013 healthcare focus, namely the development of the emergency care, per capita funding in primary care, streamlining the system of specialised care provision and improving staff training. As part of efforts to improve staff training, a new medical school will be opened at Nazarbayev University in 2014-2015, which is to become a benchmark for other schools of medicine in the country.

“The president has called for the National Oncology Research Centre to open in Astana,” Orynbayev reminded participants. “It should be possible to start construction work in the second half of the year on the designated land site. We are also in need of inter-regional cancer centres.”

The vice prime minister also cited the president, saying “the measures taken by the state would be a thousand times more effective if healthcare was each family’s concern.”

“In this respect a number of tools are being developed to ensure joint responsibility of the state, the citizen and the employer for the health of every citizen and the society at large, including through targeted social assistance on the basis of the Employment 2010 state programme,” Orynbayev added.