By Maral Zhantaykyzy in Culture on 6 February 2013

ASTANA – Since its creation 33 years ago, “Atameken” (“Land of My Fathers” in Kazakh) has remained as popular as ever. 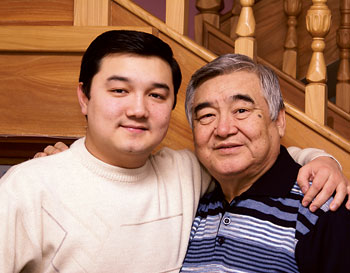 “Atameken,” with lyrics by Kadyr Myrzaliev and music by Eskendir Khasangaliev, is considered the unofficial hymn of Kazakhstan. Kazakh young people sang this song during the protests in Almaty in December 1986, making “Atameken” a symbol of the struggle for an independent Kazakhstan. The patriotic song usually accompanies all major events, and listeners usually stand while it is performed.

The first performer of the song was its composer, Eskendir Khasangaliev, a well-known Kazakh composer and singer. Khasangaliev has written more than 200 songs, choral works, film music and musical performances. He is called one of the founders of modern Kazakh music. Possessed of a lyric baritone, his singing is warm and heartfelt. His compositions are performed by stars of the Kazakhstan stage such as Roza Baglanova, Bibigul Tulegenova, Ermek Serkebayev, Roza Rymbayeva and other young singers.

Each of his songs has its own story. His first song, written at age 21, was for his mother. That song “Anaga Salem” (“Greeting to Mother” in Kazakh) became a hit and made him almost instantly famous around the country. Then there were the songs “Ademi-ay” (“My beautiful” in Kazakh), “Sagyndym seni” (“I miss you”) and “Gul Sezim” (“Tenderness”).

These songs were dedicated to his beautiful girlfriend Dariko, whom he met at one of his concerts and then lost for seven years. When they met again they did not part for almost 40 years. He dedicated to her his most important song “Eskirmeydi Mahabbat” (“An Eternal Love”). Eskendir and Dariko Khasangalievs are models of love, allegiance and harmony.

In 1978, after the birth of his son, Birzhan, the composer wrote another hit, “Kelshi-kelshi, Balashim” (“Come, come to me, my baby”). Today’s youth grew up with that lullaby. Today, Eskendir and Birzhan Khasangalievs often sing duets. The composer’s son followed in his father’s footsteps: Birzhan also composes music, sings and performs.

Eskendir Khasangaliev always sings live and his voice is still soft and velvety. He has been recognised steadily throughout his career, winning the Lenin Prize at age 30, the Honoured Artist title at 40 and the People’s Artist title at 45.

Khasangaliev is famous in Kazakhstan, but his fame doesn’t stop at the county’s borders. His songs are also popular abroad. Recently, the Chuvash socio-cultural centre in Pavlodar translated “Atameken” into the Chuvash language. Khasangaliev also writes music for poems by Russian, Uighur, Tatar and German poets.

One of Khasangaliev’s songs was chosen as the hymn of the Seventh Asian Winter Games in 2011. The composer was also among the Olympic flame torchbearers.

In 2012, Khasangaliev wrote “Alga, Kazakhstan! Biz Zhenemiz” (“Go, Kazakhstan! We Shall Overcome!”) and Kazakhstan’s Olympic team fans went to the Olympic Stadium in London as one singing this hymn. The name of the song immediately became a Kazakhstan team motto.

Despite his age, the 72-year-old composer continues to work actively, writing music and singing for his fans.

On February 13, Khasangaliev will perform at the Kazakhstan Central Concert Hall in Astana.