By Anel Adilbayeva in Culture on 20 February 2013

ASTANA – Fashion week has returned to Kazakhstan, prompting fashionistas in the country to scope out what’s happening in design both within the country and abroad. 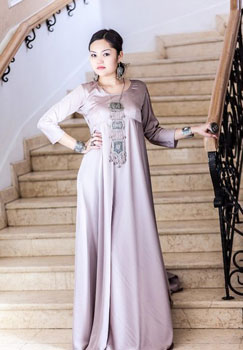 The development of the fashion industry is considered to be one of the most topical issues in the social and contemporary life of the country. Kazakhstan is changing and so are its people. Young people across Kazakhstan want to stand out from the pack; they sport the latest trends from London, Paris, Tokyo and New York. Increased opportunities to travel and to study and live abroad have opened new horizons for the people. Globalisation is fueling the trend to show off a global style. And Kazakhstan’s fashion industry is evolving. The growing number of fashion events, designers and stores demonstrate that fashion in Kazakhstan has grown beyond the beginners’ stage and is ready to make a bigger splash in the world of couture.

So far, Kazakhstan has only been represented at Paris Fashion Week once, by the break-all-boundaries designer Kenzhe Devyatko (Kenje), who in 2008 used the international opportunity to show bold nomadic haute–couture. Since then, Kazakhstan’s designers have not made it to Paris. At home, however, amidst the growing competition, diversity of trends and availability of materials, as well as the changing mentality of the nation, a number of new and promising designers have appeared among the existing titans of Kazakhstan’s fashion.

According to fashion historians, the term first appeared in the 12th and 13th centuries, when people began to wear clothing that was clearly designed more for beauty than function. Since the 17th century, French fashion has been the model for the world, and the country maintains its position as a global trendsetter. Fashion began to take hold in Russia in the 17th century. Today, the fashion industry is international and highly globalised, with clothing often designed in one country, manufactured in another and sold worldwide. 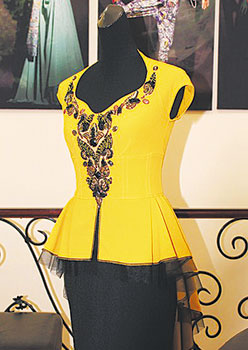 Aida Kaumenova’s dresses are a combination of elegance and style.

Only in 1987 did a group of talented designers establish the Kazakhstan Union of Designers to provide organisational structure, support creative activities, promote achievements, share experiences and protect the professional interests of Kazakhstan’s designers.

Now, the country has its own fashion week, KFW, a seven-day period during which, in a kaleidoscope of events, runways are set up, walked, and broken down for the next show, models scurry frantically from one backstage to the next and people in the most extraordinary and stylish outfits come together to see what Kazakhstan’s fashion industry has to show.

The National Chamber of Fashion, the organiser of the Kazakhstan Fashion Week, promotes the industry through this event and by many other means. The chamber unites designers under its wing and promotes designers in Kazakhstan and beyond. One of its primary functions is to act as a union for domestic designers to defend their interests. The chamber also provides assistance and supports emerging designers.

All designers wish to sell their own collections, and recognition and fame are major motivators. The fashion industry in Kazakhstan hasn’t reached the level of world-famous Italian or French brands because of its comparatively short history and a lack of financial investment and professional designers. With time, this situation should change, thanks to young talents. Local designers, however, have already found their key to success: they don’t try to compete with world-famous fashion houses but offer unique products based on their cultural heritage. Light industry in Kazakhstan has begun to grow because of increased demand for materials such as wool, denim and accessories by the local fashion gurus.

The following personalities are the current leaders of the Kazakhstan fashion industry: Kuralai Nurkadilova, whose collections sell like hot cakes in Paris and the United Arab Emirates; Balnur Asanova and Saida Azikhan, who also sell in the United States; Aida Kaumenova, who sells her collections in Moscow; Dilbar, who sells in St. Petersburg; Kuandykova & Karibzhanova, which sell in Germany and Oksana Corby in Southeast Asia. 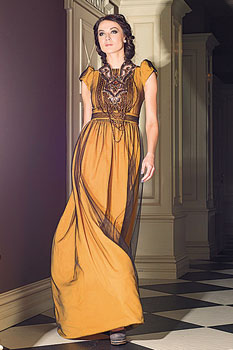 Elegance of dresses by Aida Kaumenova impresses with its flawless

Kuralay Nurkadilova is a Kazakh fashion designer who has made it to the global fashion market. She is the designer and director of her own fashion house, Kuralai, which was established in 1995. Her collections are exhibited in multi-brand boutiques in Paris and offered in major foreign markets including Russia, the United Arab Emirates, Germany, the United States and Europe.

In 2012, the Kuralai House of Haute Couture launched a new line, Kuralai-Muslim. This line uses very high quality fabrics embroidered with stones and Swarovski crystals. In her collection, Nurkadilova presented clothes for special occasions, the cost of which varies from 20,000 to 150,000 tenge. The designer says that Kuralai-Muslim combines Muslim robes with the rich colour of Kazakh traditional costumes. Kuralai collections always contain a variety of dresses with breathtaking cuts and techniques.

Another popular designer in Kazakhstan is Aida Kaumenova. Kaumenova is a successful designer and her sensuous and romantic prêt-à-porter deluxe collections can be seen in Kazakhstan Fashion Week every season. This brand has gained popularity within Kazakhstan and abroad.

“When I am creating collections for the next runway show, I must not only think creatively but I need to understand and select a particular sector of consumers. Because clothes are different if they’re for children, for glamour ladies, for large sizes or teenagers,” Kaumenova says. “The clothes affect the internal state of the women and vice versa: mood influences style.” Creating new collections, Kaumenova first imagines the type of women she wants to wear her dresses: successful, beautiful and harmonious. Every image gives her a new style and new ideas for her work.

Oksana Corby Fashion House was founded in 1997 by Oksana Corby herself. The house has participated in international fashion weeks and exhibitions and held solo shows in Kazakhstan. Many Oksana Corby dresses have become cult objects; some are in major museums.

Oksana Corby creates exclusive dresses for weddings, evening dresses and cocktail dresses for special occasions. The richness of their fabrics and their exquisite style and beauty of form have made the Oksana Corby trademark one of the most popular and beloved among the creative glitterati, political leaders and business elites of Kazakhstan. In addition, the house is involved in events such as creating the table decoration for the Pope of Rome’s visit to Astana and the Essence of Women fashion show at the Luxor Wellness Club in Almaty. Oksana Corby prefers natural fabrics and likes combining complex shades and colours.

Dilbar was named after its owner, lead designer and creative director of the house Dilbar Ashimbayeva. Dilbar focuses on prêt-à-porter deluxe women’s clothing; its image is bohemian and intellectual. One of the basic principles advocated by the house is to work only with natural materials and textures produced by artisans in India, China, Uzbekistan, Kyrgyzstan, Turkmenistan and other countries. Think Indian saris, hand-weaving in a single editions, silk-dzhamavar with metal threads traditionally produced in a limited volume—usually no more than 10 metres—and special grades of silk with different natural colour palettes. The house also uses natural, high-quality wool, linen, cotton, leather and fur. Ashimbayeva’s favourite technique is kurak or patchwork, achieved by using complicated articulation, decorative patterns, a lot of texture, subtle colour blends, or, conversely, colourful decorative contrasts. Unlike many European fashion houses, large embroidered patterns are another hallmark of Dilbar clothes.

What we should expect from Kazakhstan’s designers in the spring-summer season is still a question but globally, spring-summer 2013 promises to be bright, patterned and striped. Spring – summer collections are impossible to imagine without blouses with floral motifs. The 1990s saw a lot of sporty spring and summer looks. Exquisite black dresses with sneakers, beige coats with jogging shoes, leather jackets with sweatpants and bright stylish bags all promise to be global sports trends of the season.