Kazakhstan’s Culture on Display in Prague 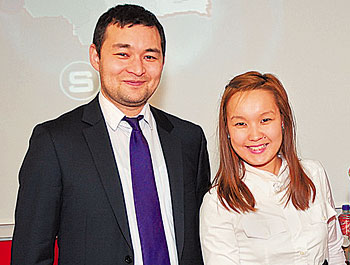 Guests of the exhibition enjoyed the event.

ASTANA – The rich culture of Kazakhstan has gone on display in one of Europe’s most ancient and fabled cities.

A new exhibition called “Kazakhstan – the Heart of Eurasia” opened in the Charles University in Prague on Feb. 7. It will remain on display until March 17.

The exhibition celebrates the 20th anniversary of the opening of diplomatic relations between Kazakhstan and the Czech Republic. Kazakhstan’s embassy in Prague organized the show. It worked in cooperation with the geographical department of the Faculty of Science at Charles University.

The opening ceremony was attended by diplomats, representatives of leading Czech universities and media, and by Kazakh students studying in Prague. The audience was introduced to the natural riches, ecology, history, culture and lifestyle of the Kazakh people, to the accompaniment of national musical instruments played by virtuosos. 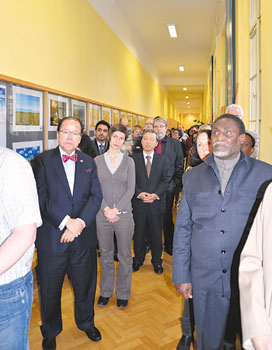 Diplomats, representatives of Czech universities and media were invited to the event to share the rich culture of Kazakhstan.

The exhibition included a show of works by the famous Kazakh artist Leyla Makhat, an honorary member of the Prague Academy of Fine Arts.

“I am very pleased that Kazakhstan is presenting interesting cultural projects in Europe, and all over the world,” Makhat told The Astana Times. “Naturally, I am very pleased to see such a positive reaction from art lovers in the Czech Republic. This interest towards the art of Kazakhstan demonstrates the intensive development of creative processes in our country which is attracting the attention of the world community.”

“The works presented at this show are dedicated to the ancient art of our nation,” Makhat said. “The study of the folk art of our ancestors was always of special interest to me and ancient petroglyphs occupied a special place in my work.”

“It seems to me that the ancient symbols of our culture are an inexhaustible source of inspiration for different generations of Kazakh artists,” she continued. “I am privileged to be able to exhibit my works on the walls of one of the oldest universities of Europe. Charles University in the beautiful city of Prague is a unique platform to showcase the achievements of Kazakhstan.”

The exhibition follows a rise in interest in the Czech Republic in the culture of Kazakhstan in recent years. Orchestras and leading musicians from the country regularly perform in the concert halls of Prague. And bilateral relations generally have grown over the past several years, including through a visit to Prague by President Nursultan Nazarbayev in October 2012 when agreements worth 155 million euros were signed.