By Dannar Kalikhan in Sports on 6 February 2013 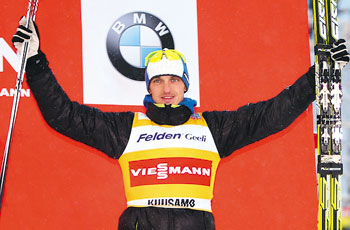 Kazakhstan’s skiing champion Alexey Poltoranin has secured victory in the men’s 15-kilometre classical mass start race in La Clusaz France in the cross-country World Cup on January 19. Poltoranin has been enjoying a successful season. Just recently, He has won several World Cup stages and won the gold medal in the Continental Cup.

It was Poltoranin’s second cross-country skiing World Cup victory in his career. The 25-year-old sportsman claimed his best World Cup results in a victory in a 15-kilometre classic in Davos in December 2010. He also took second place in the freestyle race at Gaellivare in 2012 and was third in the Ruka Triple. Those good performances came to fruition in La Clusaz as the Kazakhstan skier won a tight 15-kilometre classic mass start.

He won the men’s 15-kilometre classical-style mass start race in a sprint finish, beating Russia’s Alexander Bessmertnykh by 0.01 seconds. In fact, in a tantalizing twist, Bessmertnykh began celebrating his victory too soon before he had realized how close Poltoranin was, but it was too late for him to beat the Kazakhstan skier’s finish thrust. Switzerland’s Dario Cologna was just behind them, finishing third.

The origin of cross-country skiing dates back to the ancient days. The sport was developed in Norway, where skiing was practiced as a means of transport during the winter season. The modern form of the sport evolved during the late nineteenth century. Cross-country skiing involves mainly three styles: classic, skating and telemarking. It is becoming more and more popular among skiers.

The Federation Internationale de Ski or the FIS at the international level governs many elite events.