By Miras Abykov in Sports on 6 February 2013

On February 3, Kazakhstan’s national bandy team won bronze medal in the Bandy World Championship which took place in Sweden and Norway over the previous week. 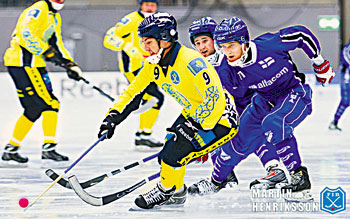 In the rematch of last year’s bronze medal game, Kazakhstan yet again faced Finland on February 3, beating its opponents 6-3. It became the fourth bronze medal for Kazakhstan in bandy world championships.

Team Kazakhstan finished third in the group stage earlier, which allowed it to compete in the semi-finals.

In the semifinal game the Russian team took over with a final score of 8-2. Russia’s Sergey Lomanov scored first, in the fourth minute. Before the break, Kazakhstan’s team was losing, 4-0, but in the 43rd minute Rauan Issaliyev finally scored.

Earlier, Kazakhstan’s team won its first victory in the World Championship on January 29, defeating Norway by a score of 10-1. Vyacheslav Bronnikov, Rauan Issaliyev and Sergey Pochkunov were the stars of the game. The victory allowed Kazakhstan to move ahead of Norway in the standings, moving from fifth to fourth place.

Earlier, Russia had defeated the Kazakhstan team by 6-4, even though Bronnikov scored first for Kazakhstan in the fourth minute of the game. And on January 28, Sweden beat Kazakhstan, 9-2. In the group stage Kazakhstan also beat Finland and Belarus, which allowed it to take the third place in the group stage.

The Bandy World Championship finals were held in Sweden and Norway and this year were played from January 27 to February 3. Games were played in Vaenersborg, Gothenburg, Trollhaettan and Oslo.

The Bandy World Championship finals are organised on a play-all system with each team playing all the others. The four with the most points meet again in the semifinals.

Russia was the favourite to win. Its team had won the World Cup six times before. However, the Russians got off to a slow start this time, losing their first game to Sweden.

Bandy is a team game played on ice in which skaters use sticks to hit a ball into the opposing team’s goal.