Journalist Asks Obama to Intervene with AES on Water Crisis

By Maral Zhantaykyzy in Culture on 20 February 2013

ASTANA – Fedor Kovalev, a Kazakh journalist from Pavlodar, published at open letter to U.S. President Barack Obama calling on him to press the AES Corporation to fulfil its investment obligations to the Shulbinsk Hydroelectric Power Plant. 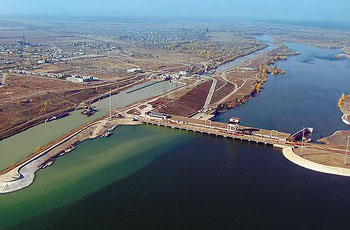 Journalist Fedor Kovalev claimed that AES (Applied Energy Services), a major American company, had delivered far too little water, too late, through the facilities of the Shulbinsk hydro plant in eastern Kazakhstan from the resources in the Upper Irtysh reservoir cascade to the Irtysh flood plain.

“During the last four spring seasons, AES has allowed gross violation of the overflow schedule of the Irtysh river flood plain,” Kovalev wrote. “Water was supplied to the riverbed with a big delay and in insufficient volume. The annual absence of artificial flood waters has caused huge damage to the environment, agriculture and interests of a quarter of Kazakhstan’s population. Flood meadows are exposed to gradual desertification and the forage crop is significantly reduced. Unique valuable species of plants and fish are threatened.”

“This year (2013) is a critically important one for us,” Kovalev wrote. “Repeated drought may become fatal, especially on the threshold of Kazakhstan joining the World Trade Organisation (WTO). Please ask AES to observe the rules. Give us the river overflow back now!”

Svetlana Mogilyuk, an independent ecologist, in comments to various media outlets said that Kovalev’s concerns were valid ones. “The issue of Irtysh water flood could have a catastrophic effect on the development of the whole Pavlodar region,” she said.

Mogilyuk, an expert on the region, said the delivery of insufficient water from the reservoir would seriously harm the region’s agriculture and threaten public health because the floodplain could not compensate for the effect of saline ground water, threatening public water supplies.

In 2002, the government of Kazakhstan issued new rules to regulate the exploitation of water sources in the upper Irtysh reservoir cascade. AES respected these requirements until 2009. However, critics allege that in the following years, those regulations were consistently infringed. Further infringements were explained by investors as due to water shortages in the Shulbinsk project.

Svetlana Nishchenko, AES director of public relations in Kazakhstan, told The Astana Times that the Shulbinsk power plant was discharging the correct volume of water daily on the schedule set for it by the Irtysh basin water inspection authorities. The volume of water discharged every spring and the schedule for its flow are set by the State Commission on Floods.

“Due to the dry winters and reduced water volumes in the Irtysh River in recent years, the spring water discharge at the Shulbinsk HPP took place in the difficult conditions of reduced water flow. This year, due to the presence of large quantities of snow in the mountains of East Kazakhstan, the Shulbinsk HPP is preparing for anticipated significant increase in the inflow into the Irtysh River in the springtime,” Nishchenko said.

Kovalev sees the root of the problem less in the breach of rules of water usage, but rather in the non-fulfilment of investment obligations to build a dam.

In accordance with its agreement, the AES Corporation is obliged to finish construction of the dam and the navigation lock at the Shulbinsk plant. However, over the past 16 years, AES has made only routine repairs instead. In 2003, the navigation lock was returned to the government of Kazakhstan. It was then completed using budget funds. The dam has still not been completed.

In 2010, Kazakhstan’s Agency for the Regulation of Natural Monopolies accused AES of defaulting on investment commitments worth $459 million. The Agency for the Protection of Competition continues its litigation with AES in the London International Court, claiming that the corporation has set unreasonably high prices for electricity of more than 20 billion tenge.

“The head of the Pavlodar region administration raised the issue of the Irtysh river overflow with the government and confirmed AES’s obligation to provide sufficient water in summer 2013. But nobody can guarantee that AES will fulfil its obligations,” Kovalev wrote in his letter which he published on his page in Facebook and sent to the White House.

Mels Eleusizov, chairman of the Tabigat Green Party, does not consider the AES the only culprit in the growing environmental problems of the Pavlodar region.

He supports Kovalev’s civic action philosophy but believes the issue should be resolved at government level with the assistance of the Ministry of Foreign Affairs and other relevant authorities.

“The government should set strict requirements. China is also involved in the Irtysh problem. Our government should work to convince China to accede to the International Convention on the Protection and Use of Transboundary Watercourses and International Lakes. We must fundamentally resolve the water problem, otherwise we can expect a second Aral Sea tragedy to happen,” Eleusizov, who ran for president in 2011, told The Astana Times.

On Jan. 22, the 10th session of the Kazakhstan-China joint commission on transboundary rivers in Astana concluded with an agreement to complete the scientific assessment of the water resources of the two countries in 2014. The results of this assessment will be used as a basis for developing a bilateral agreement on the division of water resources in 2015.