By Natalia Ivanova in Nation on 6 February 2013

BALKHASH – On the bank of the ancient lake this company town, which specialises in copper production, is working to meet the challenge set by President Nursultan Nazarbayev in his Strategy Kazakhstan-2050 to address social imbalances in regional development, including in the provision of employment. 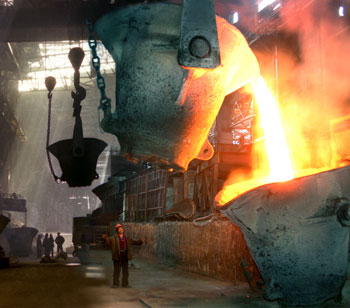 The Balkhash copper melting plant has been a backbone of the city for several decades. New investments are planned in related industrial facilities.

Through the state programme Employment 2020, some families from the depressed Sayak, Abay and Aktogai districts received keys to their new flats in this town of metallurgists on New Year’s Eve.

It is the second time this has happened in Balkhash, where for six months housing was being constructed for the new employees, who are increasing the population of the town. In September a 48-unit building was commissioned in the Konyrat village.

All newcomers will be employed in businesses in Balkhash and Konyrat Village. According to Mayor Nurlan Aubakirov, the implementation of specific measures to ensure sustainable employment is ongoing.

More than 500 citizens will be provided with permanent jobs. A total of 250 jobs were established in one fell swoop at a new copper cathode production plant commissioned in May 2012. Construction within the Industrialisation Map of a plant for processing copper-bearing slag and a hydrometallurgical shop for producing copper cathode, drawing an investment of 3.3 billion tenge and creating 140 new jobs, is ahead.

Over 500 citizens of the city will be engaged in public works, 120 men and women will work in training, two dozen people will work in the social sphere, and youth practice will help 30 young people to begin their careers.