By Askar Beysenbayev in Astana on 6 February 2013

ASTANA – Kazakhstan’s national tennis team has advanced to the Davis Cup quarterfinals against the Czech Republic after their spectacular win over Austria in the Davis Cup first round held here on Feb. 1 and 3. 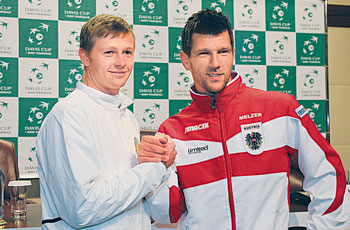 After the outstanding victory over Austrian team with the score 2-0 in the first day of the tournaments, the Kazakhs athletes were only to succeed in the remaining three matches. One of the most intense was the Saturday’s doubles match.

Austrians Julian Knowle and Alexander Peya understood the importance of the game and put out their best against Andrey Golubev and Yuriy Schukin. In the first game, the Kazakh players confidently led with 40:0, but the guests surpassed themselves having recouped the remaining reserves and ended the game in their favour. Further, they only increased their advantage to 3:1. But our pair “came round” and even were able to level the draw – 3-3. Then it all went on the “swing” and the fate of the first set was decided in a tie-break, which Andrey and Yuri lost (5-7).

Thus the fate of the whole series depended on Sunday’s individual meetings of Andrey Golubev and Yugeni Korolev with Jurgen Melzer and Andreas Haider-Maurer respectively.

The first game of our 30th-ranked tennis player went unlucky, thus all hopes were placed on this meeting. Fortunately, Golubev, strengthening reserves and carefully playing on the back line, held three sets, literally, in one breath, and won with the score of 6-3, 6-4, 6-2 thereby bringing his team another victory.

Kazakhstan repeated its success of two years ago and again reached the Davis Cup quarterfinals, where our players will meet the current holders of the Cup, the Czech Republic, led by the 6th ranked tennis player of the world, Tomas Berdych.